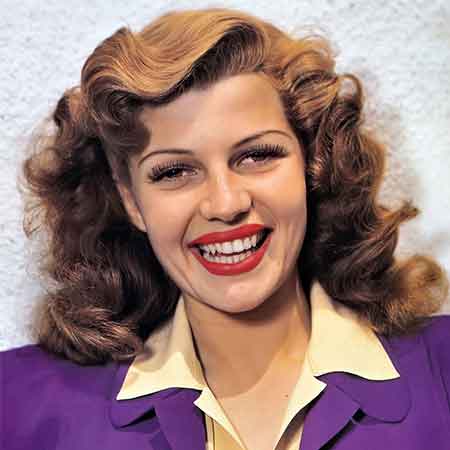 Rita Hayworth is an American famous actress who has earned a huge fame in the 1940s as one of the era's top star. She had become the most elegant screen idol of that particular period in the history of movies. She is also considered "The Love Goddess" and is "listed as one of the top 25 female motion picture stars of all time in the American Film Institute's survey, AFI's 100 Years...100 Stars." Sadly, she died in 1980 after being diagnosed with Alzheimer's disease.

The famous actress Rita Hayworth was born Margarita Carmen Cansino in Brooklyn, Newyork in 1918. She was the daughter of Spanish-born dancer Eduardo Cansino and her mother Volga Haworth, and, as a young child, she has also performed in her parents’ nightclub.

Being that young and performing in the nightclub in that early age, she got the attention of a Hollywood producer, and in the mid-1930s she got a chance to be featured in the films, using her given name of Rita Cansino.

Hayworth's father wanted her to become a  professional dancer at the same time her mother wanted her to be an actress as she had a good height and a beautiful face.  Hayworth always knew that dancing was not her cup of tea, but she didn't had the courage to admit in front of her old man, so she began taking the lessons. Rehearse, rehearse, rehearse, that was her childhood.

She attended dance cla s ses every day for years at Carnegie Hall complex where she was taught by her uncle Angel Casino. When she was just four years old she got chance to be featured in the Broadway production of The Greenwich Village Follies at the Winter Garden Theater.

Similarly, Hayworth's talent and dedication helped her to be featured in La Fiesta, which was a short movie. In 1927 her father Eduardo Cansino took the whole family to Hollywood, he thought that dancing could be featured in the movies and his family could be part of it.

In 1931 the father and daughter collaborated to form an act called the Dancing Cansino, Hayworth was too young to work in nightclub & bars under California law so her dad Eduardo took her to work across the border in Tijuana, Mexico.

In that early period, it was a popular tourist spot for people from Los Angeles as there was a high chance to be noticed by Film Producer & directors.

Rita Hayworth was featured as Rita Casino and appeared in exceptional roles, often shown as a  tropical foreigner. In 1934 when she was sixteen years old Hayworth got the opportunity to perform the dance sequence in the "Spencer Tracy" film Dante's Inferno(1995).

She got her first acting role as an Argentinian girl in Under the Pampas Moon. Sheehan was preparing her lead in the 1936 Technicolor film Ramona hoping to establish her as Fox Film's new Dolores del Río. Following that, she got freelance work in several small-studio films and a part in the Columbia Pictures feature Meet Nero Wolf (1936). Studio head Harry Cohn signed her to a seven-year contract and tried her out in small roles.

Heyworth, later appeared in three independent movies in 1937, In the same year, she has appeared in five Columbia B movies, later on, 1939 Cohn forced director Howard Hawks to use Hayworth for a small role but important, character as a man-trap in the aviation drama Only angel have wings in which she played opposite Cary Gant and Jean Arthur.

After that she became a famous Hollywood sensation and got the opportunity to appear in many movies  some of the famous movies are listed below:

Later on 1960, Rita won the Walk of Fame and again she was nominated for best Actress-Drama In Golden Globes award in 1965.

As Hayworth was an American actress and dancer, it was estimated that she collected a huge total of money from her acting and dancing career. The famous Actress had a net worth of $10 million.

She had a Mansion in Beverly Hills, California and sold it for $3,960,000.  After being an Accomplished personality, Hayworth lived a lavish life in a luxurious style.

Rita Hayworth actually married five times! At the age of 18,  she first tied the knot to her manager Edward Judson. Their relationship, however, did not last long and ended in a divorce.

“I married him for love, he married me for an investment. From the first, he told me I couldn't do anything for myself. My personality slinks deeper and deeper into a shell, maybe that was the reason for divorce."

After some time in 1943,  she got married to Orson Welles who was also the well-known actor of Hollywood, They had done a movie together named "The lady from Shanghai". Somehow their relationship didn't last for long and was separated in 1947.  They had a daughter together named Rebecca Willis.

She, later on, married Prince Aly Khan in 1949 which also didn't last for a long time and ended in 1953. The couple had a daughter together named Princess Yasmeen Aga Khan.

In the same year, Hayworth met her fourth husband Dick Haymes, Their relationship lasted for Two years and separated. She was then introduced to James Hills. The pair married in 1958, like her every other affair, it also didn't work, and they separated in 1961.

President Ronald Reagon, who was one of Hayworth's contemporaries in Hollywood, issued a statement:

"Rita Hayworth was one of our country's most beloved stars. Glamorous and talented, she gave us many wonderful moments on stage and screen and delighted audiences from the time she was a young girl. In her later years, Rita became known for her struggle with Alzheimer's disease."

"Her courage and candor, and that of her family were a great public service in bringing worldwide attention to a disease which we all hope will soon be cured. Nancy and I are saddened by Rita's death. She was a friend who we will miss. We extend our deep sympathy to her family."

May her soul rest in peace.