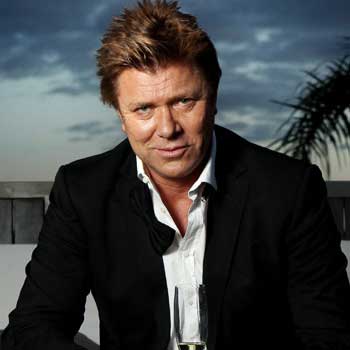 Richard Stephen Wilkins, known as Richard Wilkins is an Australian based television presenter working currently as the Entertainment Editor for the Nine Network and Today. From Today Network, Richard features and interviews the showbiz of the world. He has interviewed from Madonna to The Rolling Stones and from Andrea Bocelli to Nigel Kennedy. He is also an in demand MC internationally. The notable work as MC includes the 1996 Olympic Games in Atlanta, Australian Fashion Awards, Tourism and Travel Events, etc. He has also hosted the number of charity functions and corporate events.

Richard Stephen Wilkins was born in the year 19th June 1954 at New Zealand. He has graduated in Major English and Music from teacher’s college at New Zealand. He is also known as Richard Wilde and Dickie. As Richard Wilde, he is an aspiring pop singer. He had little chart success. In 1980, he moved to Australia with his band Wilde and Reckless and released some singles and a six track EP. He left the music arena and started working as a Promotions and Marketing Manager for Sydney stations 2Day FM and 2UW which is now known as KIIS 106.5. Afterwards, he moved to television arena. Richard started as a television presenter from Australian series of MTV broadcasted by Nine network and also hosted a game show called Keynotes in the year 1992. He has been active as a television presenter since 1987 till present. Richard celebrated his 25th years serving in the television arena in 2012.

Still hunk and handsome, even at the age of 60 years old by 2014, Richard has won the hearts of many. He is the current host of weekend program called Mornings aired from 10 am to 12 pm in the smoothfm 91.5 in Melbourne and 95.3 in Sydney. Richard is also a influencing writer. His autobiography named Black Ties, Red Carpets, Green Rooms was a best seller book reaching number one by December 2011. Recently in the 2014 Queen’s Birthday Honors List, Richard Wilkins was appointed as a member of Order of Australia for “significant service to the community through a range of charities and to the entertainment industry.”

Talking more on him, Richard Wilkins has macho and strong physical appearances. He stands the height of six feet and two inches tall. His looks and personality is a killer that woos every of the women. Richard is rumored to have affair with several of his girlfriends and has several of the wives. He is rumored to be in relation with Michelle Burke, Tottie Goldsmith, Rebecca Naso, Collette Dinnigan, Brooke Shields, etc and there are lots of his pictures with them they really make people think it’s true. Going through the rumors, it is not vague to say he is not a gay. He has interest on women. He ihas been through 3 marriages with two divorces and has five children altogether. He has a daughter named Estella Sophia Dinnigan from his partner Collete, with whom he never got married. Estella is the youngest one. He has a son named Adam from his wife Lynette. His first child was born when he was 18 and his wife Lynette was 16. Other of his children after Adam is Rebecca, Nick, Christian and Estella. He is in the topic of gossip in the Australian Entertainment Industry due to his relationships and affairs news now and then which can be read in the internet sites.

Richard worth approximately 1.5 million dollars. He is happy with his work and pay. He resides in Australia with his family and is active in social networks like Twitter, Facebook and Instagram. His fans can know more on him searching in different internet sites including his pictures and photos.