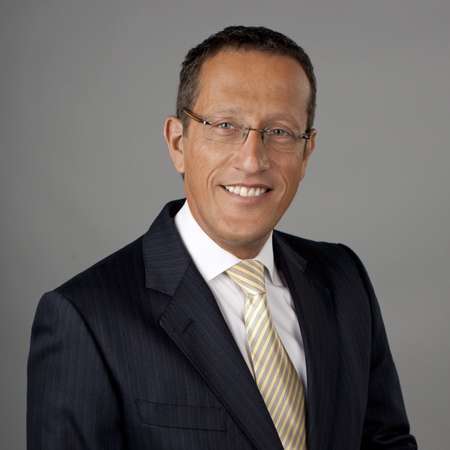 Richard Quest is a New York-based English journalist working for CNN International as an anchor and reporter. He has served as an anchor for Quest Means Business. He is also known for hosting the monthly program called CNN Business Traveller.

He was born on 9th March 1962 in Liverpool, England. He holds a British nationality and belongs to the White ethnicity.

He anchors the CNN show, ‘Quest Means Business, the definitive word on how we earn and spend our money. He also hosts the monthly program CNN Business Traveler and CNN Marketplace Europe.

Richard Quest started his career in journalism as a trainee journalist at the BBC in 1985. He joined the financial section in 1987 and moved to New York City in 1989 to become the BBC's North American business correspondent.

After that, he worked for the BBC as a business correspondent from the United States as part of its BBC News 24 channel. He reported on and discussed the world stock market.

Richard Quest, in 2001, joined CNN for the launch of business International. Since then, he has covered a variety of events for CNN including an analysis of the U.S. elections as American Quest.

He also covered the start of the circulation of euro banknotes and coins as well as the last commercial flight of the Concorde as one of the passengers of the event.

In 2006, he turned down an opportunity to join Al Jazeera English News. In 2015, he hosted the first season of ABC game show 500 Questions.

Richard Quest, on 8 June 2015, appeared as a contestant on The CNN Quiz Show: The Seventies Edition special playing StandUp for Kids. He was accompanied by his partner Brooke Baldwin.

He is also an Aviation Correspondent for CNN. He extensively covered the story of the Malaysia Airlines Flight 370 that went missing on 8 March 2014. He is also the author of the book ‘The Vanishing of Flight MH370: The True Story of the Hunt for the Missing Malaysian Plane, published by Penguin Random House on 8 March 2016.

In 2008, Quest was arrested for possession of crystal methamphetamine in New York City’s Central Park. He was found wandering around at 3.40 am with drugs in his pocket, a rope around his neck that was tied to his genitals, and a sex toy in his car boot.

At the trial, he was ordered by State Court Judge Anthony Ferrara to go into rehab and undergo drug counseling for six months.

In 2014, Quest revealed that he was a homosexual. He is Jewish and is not yet married.

He has a good earning from his work and has an estimated net worth of $4 million.