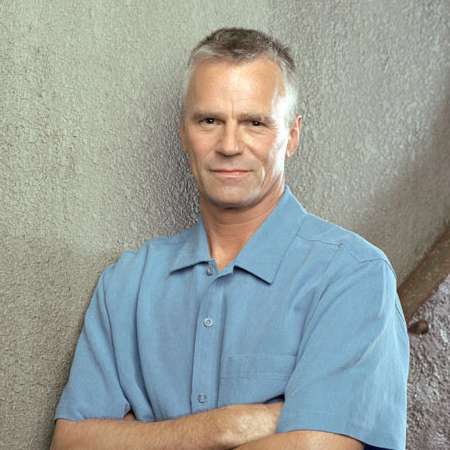 Richard Dean Anderson has established himself as one of the prominent faces in the field of acting. Starting his acting career playing the role, Dr. Jeff Webber in the soap opera series General Hospital, the actor reached the pinnacle of his career appearing as the lead actor in the TV series MacGyver from 1985-1992. He is also mostly known for his work in several other projects which include the Eyes of a Killer (1992), Pandora's Clock (1996), and Firehouse (1997). Anderson's popularity gained further fame following his breakout performance in the highly-rated series Stargaze SG-1, a spin-off of the 1994 movie Stargaze.

Richard Dean Anderson was born on January 23, 1950, in Minneapolis, Minnesota of United States. He is the son of  Stuart Jay Anderson and Jocelyn Rhae Carter. His father worked in the insurance company and his mother was a homemaker.

Anderson spent most of his early days growing up in Roseville, Minnesota along with his siblings James Stuart, Thomas John, and Jeffrey Scott. He holds an American nationality and as far as his ethnicity is concerned, he has a mixed ethnical background as he is of Mohawk, Norwegian, Scottish, and Swedish descent.

Richard completed his schooling at Alexander Ramsey High School. As a child, he was planning to establish his career as a professional hockey player unfortunately, he broke his both arms. And later he changed his mind in the field of musical and acting. He also tried for a while to become a jazz musician.

In order to pursue his career in the field of acting, Anderson went on to join St. Cloud State University. After that, he attended Ohio University but before receiving his degree he drooped out. Just after his soph 0re year in college, he went on to participate in a cross-country bicycle ride along with his friends from Minnesota to Alaska.

Richard Dean Anderson landed his first professional acting role in the American soap opera, General Hospital as Dr. Jeff Webber from 1976 to 1981. He subsequently featured as an Adam in the CBS TV series Seven Brides for Seven Brothers for a year from 1982-83.

The actor first came to the limelight and gained worldwide fame after he landed his role of Angus MacGyver in the highly-rated TV series MacGyver alongside Richard Dean Anderson, Michael Lerner, and Dana Elcar. His popularity gained further attention following his greatest performance in Stargate SG-1 in which he shared the screen along with Kurt Russell and James Spader.

In the year 1995, the actor featured in a comic series of only twelve episodes about a dime novel Legend. He reprised his character of Angus MacGyver in a MasterCard commercial during Super Bowl XL in 2006. He has also portrayed General Jack O'Neill in Stargate Atlantis and Stargate Universe which premiered for the first time in October 2009.

Charity And Other Works

Besides, Richard Dean Anderson has also been involved in a number of charity projects. He is a supporter of the Waterkeeper Alliance, an organization trying to stop water pollution. He is also a member of the youth organization Challengers Boys and Girls Club. For his commitment to the foundation, he also won the 1995 Celebrity Award from the Make-a-Wish Foundation.

Anderson has likewise supported a number of non-profit organizations and has done numerous public service announcements to show his support. He supports the Special Olympics. He is a member of the Board of Advisors of the Sea Shepherd Conservation Society. He recently helps many environmental organizations.

Through his numerous significant roles in both movies and television, Richard Dean Anderson has made a decent amount of money. According to the celebrity net worth, Richard's current amount of net worth is approximately $20 million, in 2021. The actor is also the proud owner of the Audi A3 which is worth around $38,350.

In the year 1987, Anderson bought the home for around $1.06 million in Malibu, California, United States. The  3,835 sq ft home also boasts 4-beds including 4-bath. In 1982, he was cast in the comedy film Young Doctors in Love which became an instant hit at the box office making $30,688,860 whereas its production cost of around $7 million.

It is still a mystery that Richard Dean Anderson is still married or not married. But the actor dated a number of prominent artists like Teri Hatcher, Lara Flynn Boyle, Sela Ward, and German ice-skater Katarina Witt. The reason behind the absence of mentioning as these girlfriends his spouse is a hidden story of a life that he has not flashed across.

Apart from those affairs, Anderson was in a long relationship with his girlfriend Apryl A. Prose from 1996 to 98. The couple first met in New York through a mutual friend Michael Greenburg, producer of  Stargate and  MacGyver. The couple welcomed their first child, a daughter Wylie Quinn Annarose on August 2, 1998.

As of now the two are living separately as his ex-girlfriend Apryl married Jim.

Anderson is also called out by his nickname as Rick, RDA, Our Last Hope as well as The Human Action Man. Richard has a good collection of travel.

Anderson has also expressed an interest in teaching juggling and clowning. And his favorite TV show is The Simpsons (1989).

The actor from the last few years has never talked about his love life. Probably, he is leading a single life. As of now, he divides his time sometimes in Los Angeles, California, and sometimes in Vancouver, British Columbia, Canada.

Richard is a successful name when it comes to a space in the film and TV industry. With decades in the industry, his accomplishments are praiseworthy.

However, he seems to be a recluse when it comes to social media profiles. Despite being so successful, he is not active on any social media platforms, be it Instagram or Twitter. It looks like he does not enjoy the platforms as much.