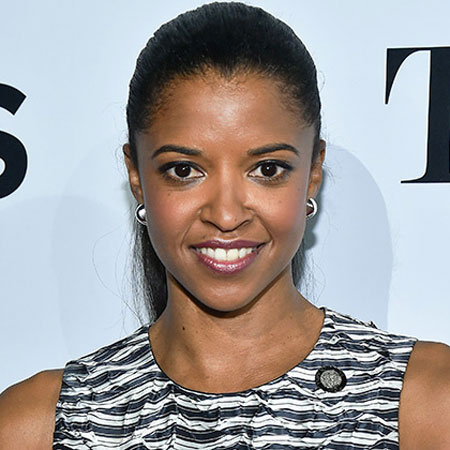 Well recognized as Angelica Schuyler in the Broadway musical Hamilton, which won her the 2016 Tony Award for Best Featured Actress in a Musical, Renee Elise Goldsberry is an American actress, songwriter, and singer.

Goldsberry is married to Alexis Johnson since 2002, living a happy life with their two children.

Renee Elise Goldsberry was born on 2nd Jan 1971 in San Jose, California, and grew up in both Detroit, Michigan, and Houston, Texas. She attended Cranbrook Kingswood School in Bloomfield Hills, Michigan.

After graduation from High School, Goldsberry joined Carnegie Mellon University and graduated achieving Bachelors of Fine Arts in Theater in 1993. Later, she joined University of Southern California's Thornton School of Music, and graduated in 1997, with a Master of Music in jazz studies.

From 1997 to 2002, Goldsberry made her appearance on the Fox legal comedy-drama Ally McBeal as a recurring character. Renee portrayed in 43 episodes in total, prior to the cancellation of the series.

Renee Elise Goldsberry portrayed the character of Evangeline Williamson, an attorney on the ABC soap opera One Life to Live from 2003-2007. After her contract ended in the series, Goldsberry played the recurring character as an assistant attorney Geneva Pine on the CBS political drama The Good Wife. In total, she appeared in twenty-three episodes between and 2010 and 2016.

Her 2018 television works include her portrayal as Quellcrist Falconer in the Netflix science fiction series Altered Carbon and sang Johnny Cash's Ain't No Grave for the end credits of the final episode. She will also play the character of Henrietta Lacks in the HBO television film adaptation of Rebecca Skloot's nonfiction work titled The Immortal Life of Henrietta Lacks, along with other casts including Rose Byrne and Oprah Winfrey.

Renee Elise Goldsberry made her first film appearance in 2001, as Nicole Taylor in the romantic comedy All About You, for which her hard work was well praised.

She also made her appearance as Drea Smalls in the movie Pistol Whipped in 2008, following her minor supporting role as Cynthia Barnes in the crime drama Every Secret Thing, and in the comedy Sisters(2015) as Kim.

Renee Elisa Goldsberry portrayed the character of replacement Nala in the Broadway production The Lion King. She was part of the United States national tour of Dreamgirls.

Goldsberry was also nominated for a Drama League Award for Distinguished Performance, and received New York magazine Best of 2005 Award, for her role as Sylvia in the 2005 Shakespeare in the Park revival of Gentlemen of Verona.

She has also originated the role of Angelica Schuyler in Hamilton, giving her last performance as that character on 3rd September 2016. She also won a 2015 Drama Desk Award and  Lucille Lortel Award for Outstanding Featured Actress in a Musical.

Renee Elise Goldsberry has a long-running songwriting and singing career, performing and co-writing more than half of the songs on the 2001 film All About You, including the theme song.

She also won the grand prize of the 1997 John Lennon Songwriting Contest for her rock music. She also wrote and recorded an album named Everything But Kitchen Sink and an EP called Beautifully.

Renee Elise Goldsberry earns a decent amount of money from her varied career as a singer, songwriter, and actress. She also earns from sponsorships, featuring, ads, and endorsements. Goldsberry's total net worth is estimated to be more than $1 million.

Goldsberry makes $117,647 yearly from her acting, and singing career, and $26,144 from Endorsements/Sponsorships.

Goldsberry's salary breakdown over the years

Some of the famous movies Goldsberry earned from

Renee Elise Goldsberry is a married woman. She married Alexis Johnson in 2002. Goldsberry gave birth to her first son named Benjamin Johnson in May 2009. In 2014, the couple adopted a daughter, Brielle, from Africa as their second child.

At present, the couple is living a happy life, as Goldsberry is seen spending most of her time with family.