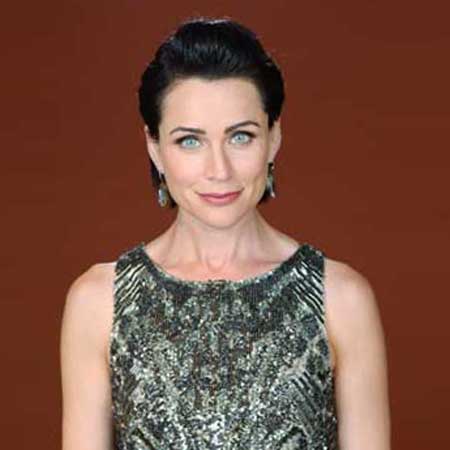 Emmy award winner Rena Sherel Sofer is an American actress. She is best known for her appearance in daytime television, episodic guest appearance, and made-for-television movies. She was born on December 2, 1968, California, the United States of America.

Rena Sofer spent her childhood in Arcadia with her family. She is the daughter of Susan Franzblau, a psychology professor and Martin Sofer who is a Conservative Jewish Rabbi. Her family moved to Pittsburgh, Pennsylvania when she was little.

After that, there her parents divorced and Rena Sofer attended the Frisch School, in Paramus, New Jersey. Later she lived with her father, Rabbi of Temple Beth EI in North Bergen. She began cla s ses at Montclair State College after completing graduation from North Bergen High School.

Rena Sofer began modeling at the age of 15 when she was discovered by a New York talent agent. Her modelling career soon turned to acting.

She appeared on ‘Another World ‘for a short time in 1964. Later she went on to be a part of daytime soap opera ‘Loving’ for 3 years, she played the character of Rockie McKenzie.

Rena Sofer’s first remarkable TV appearance was the 1963 ABC soap ‘General Hospital’, she played Lois Cerullo, Savvy record promoter. She won Daytime Emmy for the role and also became instant favorite among the audience. She also met Wally Kurth in the sets of General hospital, her ex-husband and father to her daughter Rosabel Rosalind Kurth.

Rena Sofer made the leap to primetime in mid 90s, guest featuring in a number of series before landing a regular episode on primetime soap ‘Melrose Place’ in 1992. She also appeared in the sitcom ‘Just Shoot Me’, which featured other artists like George Segal, Wendie Malick, Enrico Colantoni, David Spade, and Laura san Giacomo.

Rena Sofer started receiving roles on the big screen with movies like ‘Keeping the Faith’ in 2000 alongside Ben Stiller.

She also worked with Melanie Griffith in Sidney Lumet’s movie ‘A Stranger Among Us’. Sofer appeared alongside Dean McDermott, and Barbara Eden in movie ‘Always and Forever’ on October 24, 2009.

In 2013, Rena Sofer came back to her daytime roots, played  the role of enigmatic jewelry designer Quinn Fuller on The Bold and the Beautiful.

Rena Sofer was married to Wally Kurth in 1995. Her former husband is an American singer and television performer. They met on the sets of ‘General Hospital’. The couple has a daughter named Rosabel Rosalind Kurth together.

Rena Sofer and Wally Kurth got divorced after only 2 years of marriage. Sofer is now married to Sanford Bookstaver, he is an American Television director/producer. They got married in 2003. The couple has a daughter, Avalon, born on 5th August, 2005 in Los Angeles.

Rena Sofer has an estimated net worth of around $3 million. She stands at the height of five feet six inches (5’6’’) and she weighs 57kg. Her body measurement ratio is 32-25-34