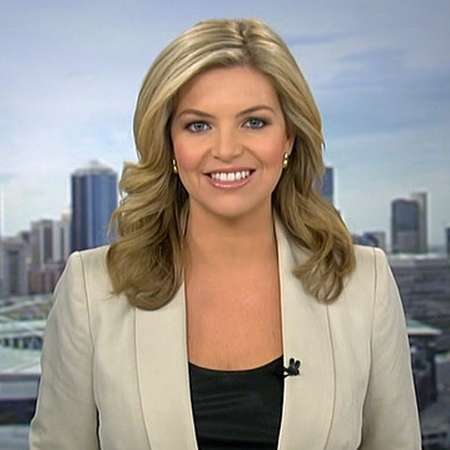 Rebecca Maddern is an Australian award-winning senior journalist. Besides, she is also a news reporter and presenter. The popular journalist currently serves as a co-host of the AFL Footy Show on the Nine Network. She previously worked at the Seven Network and became the presenter Seven Afternoon News, in September 2005.

Rebecca Maddern was born on August 6, 1977, in Australia. She is the only daughter in the Maddern Family born to Wendy Maddern and Graeme Maddern. She has two older brothers also named Paul Maddern and Anthony Maddern.

At the age of two, Maddern's parents divorced and her mother remarried to Rex Gorell when she was four. She has also three stepbrothers Paul, Brett, and Jason. Her mother Wendy worked as a hairdresser before she married my stepfather.

As a child, Maddern used to watch football. She initially had no interest in watching games but she had no option as her all brothers would gather around to watch the football match.

Maddern attended the Morongo Girls College and when the school closed she went to study at the Geelong College to complete her final year. After she completed her 12th in 1995 she completed her Arts Degree from Melbourne University but shortly after a year, she transferred to RMIT. She has a degree in Media studies with Politics andTelevision as major.

Maddern holds an Australian nationality and regarding her ethnicity, she is White.

Rebecca Maddern started her broadcasting career as a sports reporter for Melbourne radio station called Triple M. In the year 2001, she joined Fox FM as an afternoon news reporter.

At the beginning of 2002, Maddern went on to work at Nova100 (FM) and started working as a breakfast Newsreader. She also worked Seven Network and she covered the Victoria’s January 2003 bushfires.

Maddern replaced David Johnston as the presenter of Seven Afternoon News in September 2005 until the bulletin moved to the Sydney studios of the television network. In 2013 when the Seven Afternoon News’ production moved back to Melbourne Rebecca returned to the show replacing Samantha Armytage. In August 2013 the show was, however, given to Melissa Doyle and Matt White.

In March 2014, Maddern began working as Melbourne correspondent for Sunrise replacing Nick Etchells. In November 2016, she landed a job as the host of Australian Ninja Warrior that premiered in July 2017, on the Nine Network.

Rebecca Maddern's Net Worth And Salary

The renowned media personality Rebecca Maddern has earned a good amount of money from her journalism career which as per some online sources is believed more than $1 million.

Rebecca Maddern won the prestigious Quill Awards for 2003 Best TV News report for her coverage of when the Victorian country town Omeo was under threat due to the fires. In 2007 she was named the amba s sador of Geelong Cup and in 2011 she became the no.1 female ticket holder of the Geelong Cup.

Maddern also became the member “That’s Melbourne” Campaign which is designed to make the people of Melbourne explore the city more.

With her dedication and hard work, obviously, Maddern has a good future. Her attractive personality and her stunning beauty have always been plus point in her career.

Rebeca Maddern married Geelong real estate identity James Wilson in October 2006 but the couple got divorced later. The reason for their divorce is yet to be revealed.

Following their divorce, started dating her boyfriend, Seven News chairman Trent Miller in early 2014. And the couple tied the knots in March 2014. Her husband Miller is now a cameraman for GTV-9 as well as works for the AFL Footy Show.

Maddern was announced in November 2017 that she was pregnant with her first child. And the two welcomed a daughter named Ruby Mae, on  12 April 2018.

Rebecca Maddern stands at the height of 5ft 8 inch and her weight is 56kg. She has a blonde hair colored and blue eye colored.