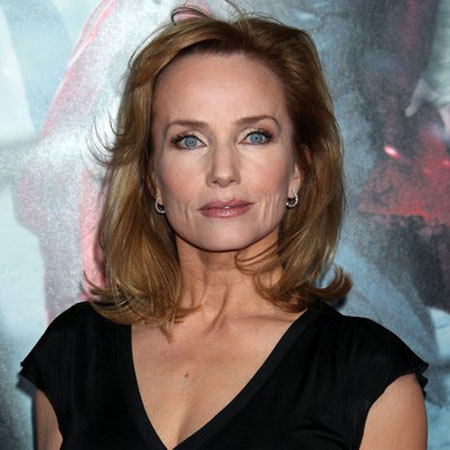 Rebecca De Mornay is an American actress as well as producer, who debuted in 1983 American romantic comedy film, Risky Business.

Rebecca portrayed in movies such as Sara in Runaway Train, Thelma in The Trip to Bountiful, Helen McCaffrey in Backdraft and as nanny Peyton Flanders in 1992’s The Hand That Rocks The Cradle.

Rebecca De Mornay was born as Rebecca Jane Pearch on August 29, 1959, in Santa Rosa, California, United States of America. She belongs to white ethnicity and holds an American nationality.

Mornay is born to Julie (Eagar) and Wally George, a television, radio commentator as well as a DJ. Her parents divorced when she was young, and Rebecca’s mother married to Richard De Mornay, and Rebecca took his stepfather’s surname, De Mornay when she was five.

Rebecca has several half-sisters and half-brothers whom she has never met. Her paternal grandmother was child actress Eugenia Clinchard.

Rebecca did her schooling from Summerhill School in Leiston, Suffolk, England. She also learned acting cla s ses at the Lee Strasberg Institute in New York.

Rebecca De Mornay’s first appearance in the movie was a cameo in American romantic musical film, One from the Heart.

In the year 1985, Mornay played the role of Slugger’s Wife and co-starred in The Trip to Bountiful and Runaway Train, both of which were nominated for several Academy awards.

The Same year Mornay appeared with Starship’s Mickey Thomas in the music video for the song 'Sara'. The song reached the top in the Billboard on March 15, 1986.

Mornay’s most successful movie is The Hand That Rocks The Cradle, released in 1992. She also starred as a defense lawyer in the Sidney Lumet’s murder drama Guilty as Sin (1993) with Don Johnson.

In 1995 Mornay appeared in an American thriller film, Never Talk To Strangers as Dr. Sarah Taylor, where she was also the executive producer. She also appeared in the first two episodes of season 2 of Boomtown in 2003.

Rebecca De Mornay married to American novelist, Bruce Wagner on December 16, 1986, however, due to some misunderstanding between them; they divorced in 1990.

After divorced with Bruce, Rebecca was engaged to Canadian singer, songwriter, poet, musician, novelist, as well as a painter, Leonard Cohen but later they broke up.

Rebecca has two children Sophia born on November 16, 1997, and Veronica born on March 31, 2001, with her ex-boyfriend, Patrick O'Neal who is a former actor, and current studio host/reporter for Fox Sports West/Prime Ticket.

Rebecca De Mornay has earned a good salary from her television series and movies which add up her current net worth is around $9 million.

Mornay’s notable movies, such as “Runaway Train,” “Backdraft,” “The Hand That Rocks the Cradle” and much more.