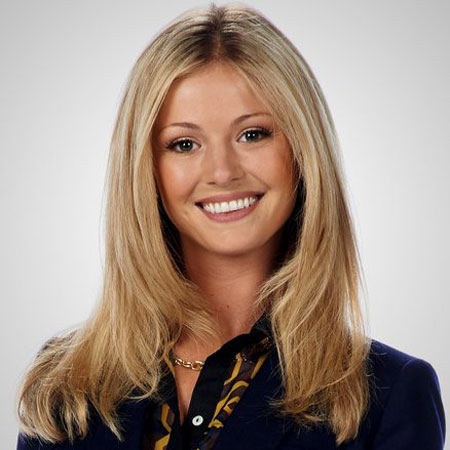 The Canadian actress, Rebecca Dalton made a name for herself bringing life to the character Della in the teen comedy My Babysitter’s a Vampire. Besides, she's well known for her work on Rocky Road (2014) and An Unexpected Christmas (2016) as well. Rebecca received her first acting credit with a guest character on the series Unnatural History in the year 2010.

Born on January 10, 1989, Canada, Dalton was raised up in Oakville, Ontario hometown with her brother Evan. Her brother Evan is the vice president of the Vancouver in a financial services company, RentModa.

Dalton is the daughter of Jane McKinnon Dalton and Mark Dalton. She attended Oakville Trafalgar High School and St. Mildred’s-Lightbourn School and graduated in the year 2006.

After completing her primary level, Rebecca traveled to South East Asia and visited Hong Kong, Thailand, Cambodia, and Vietnam in five months. After she came back from Asia, she also visited Toronto and Ontario. At this time, she attended at Ryerson University and majored in sociology.

Regarding her nationality and ethnicity, Rebecca is a White Canadian.

Rebecca Dalton made her on screen debut with a guest role in the series Unnatural History. Before landing in The L.A. Complex in 2012, she also featured in My Babysitter's a Vampire in 2011.

In addition to her work in TV series, Dalton also made a guest appearance in the Full Cast & Crew in 2016 along with Nick Bateman, Justine Deeley, and Tom Green as well.

The 28-year-old Rebecca Dalton is an unmarried woman. She is currently in a relationship with Canadian car racer James Hinchcliffe. Her boyfriend James, is a real daredevil and has a very aggressive driving style with great techniques.

They knew each other from school days. At that time, Rebecca was one of the gorgeous girls in school, and James had a crush on her. But he didn't have the guts to ask her out.

Nonetheless, Hinchcliffe asked her to go to Prom with him but as friends. However, the couple began dating in the year 2015 after her school sweetheart James faced a major car accident.

Rebecca called to check on him, and then the pair began seeing each other. Currently, the lovebirds are spending a quality time with each other. She currently lives in Indianapolis, Indiana, United States.

A rising actress, Rebecca Dalton is living an opulent life. Dalton’s primary source of income is her acting career. She has earned a handsome amount of net worth that is estimated to be $1 million.

Dalton’s boyfriend, James has garnered an amount of salary of about $1,13,52,000 annually from Indy Car Race Company. James’s net worth is estimated to be $28380000 in his bank account. She has an hourglass figure with her body measurement of 32-22-33 inches.