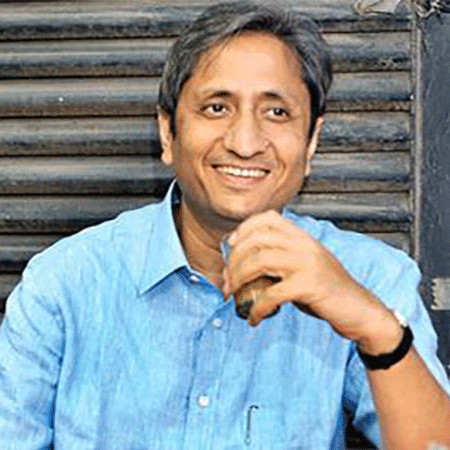 Ravish Kumar was born on 5th December 1974 in Motihari, East Champaran, Bihar, India. He is an Indian TV anchor, journalist, and a writer. He covers the topic related to Indian politics and society. At NDTV India, he works as the senior executive editor. He also hosts a number of programs including the channel’s flagship weekday show named Hum Log and Ravish Ki Report. He is of Indian nationality. He belongs to orthodox and a conventional family.

Ravish Kumar attended Loyola high School which is situated in Patna. He has completed his graduation from Deshbandhu College, a Delhi University. He hosts a show called ‘Ravish ki Report’. He also hosts other programs including NDTV India’s flagship weekday show Prime Time and Hum Log. Recently in the year 2016, Ravish has been included in the list of 100 most influential Indians 2016 by The Indian Express.

In 2010, Ravish Kumar also received the Ganesh Shankar Vidyarthi award for the Hindi journalism and creative literature. Again, in the year 2013, he received the Ramnath Goenka Excellence in Journalism award for the journalist and Indian News television award in the Year 2014 for the best Hindi news anchor.

Ravish Kumar is married to Nayana Dasgupta. She is a history teacher at Lady Sri Ram College. During his M.Phill in Delhi, he first met his wife. The couple first became very good friends and then they started dating. Before marriage, the couple had dated for seven long years and then decided to get married.

The couple faced difficulties because both of them belong to different family background and religion. However, Kumar decided to get against of family marry Nayana. The couple has no child yet. In leisure time, he loves to travel and play chess. Kumar’s monthly salary is average of Rs 20 lakhs and an annual salary of Rs 2.5 crore.

Currently, Ravish Kumar has been praised as well as criticized for his comments on politically influenced media coverage of JNU Controversy. He had talked to certain media reporters especially criticizing harshly against Arnab Goswami, the editor-in-chief as news anchor of Times Now and et Now. Without taking any names he said that the NewsHour debate on Times Now which was conducted by Arnab Goswami was such a noise but nothing else. He also said that such people wearing suits sit and spark controversies from within the news studio, without even knowing about matters on grass-root levels.

Things that Ravish Kumar had said came as a shock to the audience because it was not his personality to harshly comment on other. In response Arnab indirectly said that he will air his views and not to toe the line, like some sweet-talking journalists.