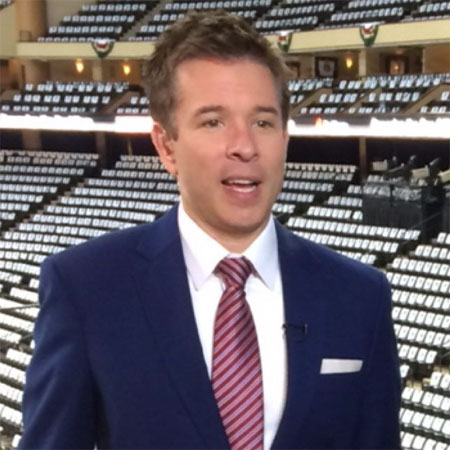 Rafer Weigel on 5th May 1969 in New Haven, Connecticut, United States. He is a news anchor and also an actor.

Tim Weigel and WGN Radio are his parents. He grew up in Evanston, Illinois. He has two siblings, both of them are sisters named Jenniffer Weigel and Teddi.

Rafer Weigel graduated from Evanston Township High School in the year 1987. For his father, at WLS-TV he had worked as an intern in summers. After finishing his studies in London Rafer graduated with a degree in theater from University of Illinois at Urbana-Champaign in the year 1992.

From a TV show named ‘The Untouchables’, Rafer Weigel entered into the television acting. In the year 1993, a news magazine hired him featuring younger journalist and also brought out of Hollywood. On Party of Five and ER Rafer did small speaking roles in the year 1995. He also guests starred on the former Vengeance Unlimited, Charmed and in JAG. After two years, he appeared on a regular series of NBC sitcom named ‘Jenny’.

Rafer Weigel’s first on-camera journalism job was in 2005 for KUSI in San Diego. He continued to work for the TV station in the morning and at nights at LA Times. The following year he got hired by KOVR as a general assignment reporter, a CBS-owned as well as an operated station. There he covered national stories, breaking news, and politics.

later in 2008 February, Rafer Weigel joined the cast of a morning show named Morning Express with Robin Meade. He along with the CNN sports team covered the 2008 Summer Olympics which was held in Beijing. At the WLS Channel 7 Rafer became the new weekend sports anchor and reporter in March 2011. Later he decided to return to his roots and accepted for Monday-Friday show at Channel 2 in ST. Louis as an anchor.

Rafer Weigel is married to a photographer named Tiffany Weigel. The couple wedded in the year 2002 June. They have a son born on 20th November 2009 named Heathcliff John Weigel.

Rafer’s parent named him after the Olympian Rafer Johnson.