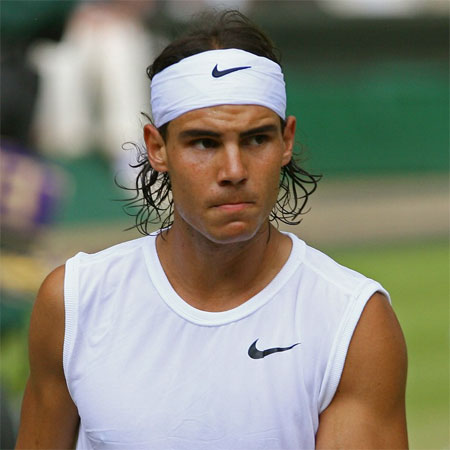 Thirty years old, Rafael Nadal is a professional Spanish Tennis player. He is best known as the greatest clay-court player in the history. He has been titled as ‘The King of Clay’.

Rafael Nadal was born on 3 June 1986 in Manacor, Spain. He was born to father Sebastien Nadal, a businessman and mother Ana Maria, a housewife. Nadal started his tennis career at the age of three so couldn't continue his education.

At the early age, Nadal won the under-12 regional championship, Spanish and European titles. He used to paly tennis and football all the time so, his father made him choose between football and tennis. After all, he chooses tennis as his career.

From the age of 15, Nadal turned into professional and participated in two events of ITF and helped Spain defeat the USA in the final of the junior Davis Cup in 2002. And in the same year, he won his first ATP match defeating Ramon Delgado and became the ninth player and finished the year in top 50.

With his powerful topspin heavy shots, speed and mental toughness, Nadal reigned as one of the big four of men’s tennis for the next several years. And finally, he took over as the world no 1 in 2008. He won his first Australian Open in 2009. After winning many matches, he was named the Laureus World Sportsman of the year in 2011.

After winning the 2015 Mercedes Cup in Germany, Nadal faced off against Roger Federer in the finals at the Australian Open in 2017 and was ultimately defeated in five sets.

Rafael Nadal is not married yet. However, he is in an affair with Maria Francisca mostly known as Xisca Perello for more than 8 years. He started dating Maria since 2005. The couple might have plans for marriage in coming future.

The couple was engaged on April 21, 2010, however, had kept it secret. The news about their engagement was revealed in 2015.

Maria is very supportive and caring and has been supporting and caring Nadal in every step of life. Both Maria and Rafael were spotted on a romantic date in Rafael hometown in the year 2015.

Nadal previously used live with his parents and younger sister Maria Isabel in a five-storied apartment building in Manacor.  However, his parents, Ana Maria and Sebastian separated in 2009.

He has revealed himself to be agnostic. As a young boy, he watched Goku, his favorite Japanese anime, Dragon Ball. In addition to tennis and football, he enjoys golf and also poker.

Rafael Nadal is a Spanish tennis player who has a net worth of $140 million dollars. As of July 2016, he earned $78 million in tournament prize money. He was one of the highest-paid celebrities in the world in 2016.

He is an extremely tall man as he has a sensational height of six feet 1 inches and his weight is 84 kg.