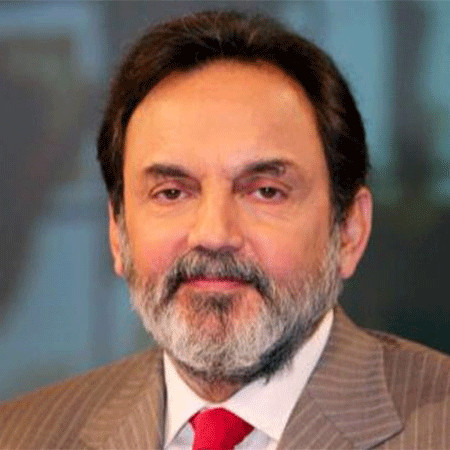 Prannoy Lal Roy was born on 15th October 1949 in Calcutta, West Bengal, India. He is from a Bengali family. He is an Indian journalist and a media personality. Roy, along with his wife, is the co-founder as well as executive co-chairperson of New Delhi Television (NDTV) .

Prannoy Lal Roy's father was the Chief Executive of the Indian unit of a British company and his mother was a teacher. He is of Indian nationality. Roy’s younger brother Indra Lal Roy was the first Indian Ace; the first Indian pilot of the Royal Flying Corp during World War I.

Prannoy Roy attended The Doon School which is located in Dehradun. After that, he won a scholarship to Haileybury and Imperial Service College in the UK. There, he got qualified as a British Chartered Accountant. He graduated with the First Class Honours from Queen Mary College from London and then completed Ph. D in Economics from the Delhi School of economics.

Prannoy Roy is a successful TV journalist, Economist, a professional British Chartered Accountant, and an author. For He has been the lead anchor for budget and election analysis on India’s national television network Doordarshan and also for BBC World News’ Question Time India. Roy along with his wife had launched a television production house called ‘New Delhi Television’ in 1998.

India’s first 24-hour English news channel NDTV 24x7 was also started by him. On Doordarshan, Prannoy Roy has also hosted new program named ‘The World This Week’ and ‘The News Tonight’. Both the programs were nominated as one of the India’s 5 best television program.

In the Indian government’s, Ministry of Finance, Prannoy Roy has worked as Economic Advisor. He was an Associate Professor at the Delhi School of Economics. There he has developed a macro-econometric forecasting model for the Indian economy. Roy has also worked as one of two Indians serving on the International Advisory Board of Council on Foreign Relation is Washington on 2009. With Butler, he has co-authored ‘India Decides: Elections 1952- 1991’ and A Compendium of Indian Elections’.

Prannoy Roy has created a network that focuses on a different number of social issues through campaigns like ‘7 wonders of India’ , ‘Greenathon’ and ‘Save Our Tigers campaign’. In 2011 he has won the Best Public Service Campaign for a Brand by a News Channel. In the same year, he also launched a campaign named ‘Jeene ki Aasha’ which focuses on maternal as well as childcare issues around the country.

Prannoy Roy married Radhika Roy in 1972, his school friend. His wife is also an Indian journalist. The couple has a daughter together. The couple is happily married and living blissful life together. The net worth of Prannoy Roy in current date is Rs 85 crore. One can follow him on different social sites. Currently, he is not promoting any brand or has any agreement with any brand.