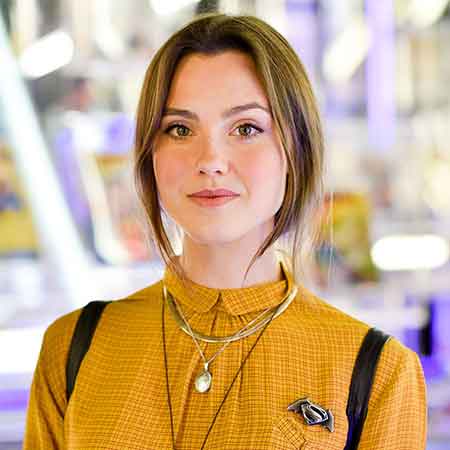 Born in Surrey, United Kingdom, Poppy Drayton started her acting career in 2012 and achieved success in a very short span of time. She is a British actress who is well known for her role Elizabeth Thatcher in the feature-length Hallmark Channel TV pilot of When Calls the Heart and also made her mark as Amberle Elessedi in the MTV fantasy drama series The Shannara Chronicles.

Poppy Drayton was born Poppy Gabriella Drayton on 7 June 1991 in Surrey, England, the United Kingdom under the birth sign Gemini which defines her personality to be quick-witted and expressive. He spent most of his early days in his hometown Surrey with his family.

Drayton attended the Arts Educational School in Chiswick, London, England and completed her graduation. As far as her ethnicity is concerned, Poppy is a Caucasian White and regarding her nationality, he is a British.

Drayton began her acting career after appearing in the short film Emily as the lead role in 2012. Then in 2013, she appeared in the Hallmark Channel's television movie pilot for When Calls the Heart. In the movie, she portrayed the role of Elizabeth Thatcher which was later taken over by Erin Krakow.

A date has FINALLY been set! Swim into the theatre on August 17th

In the same year, Drayton also got her first stage work appearing at London's Jermyn Street Theatre in the Green Bay Tree. In 2015 she did two films; British Independent horror movie Unhallowed Ground as Verity Wickes and Writers Retreat as Jo.

In 2016 The Shannara Chronicles premiered on MTV and got average reviews. In 2018, she played the role of Elizabeth in the adventure and Fantasy film The Little Mermaid and also appeared in the hallmark tv movie named Home by Spring as Loretta Johnson.

Poppy Drayton's Net Worth And Earnings

The proficient actress, Poppy Drayton gained a huge success in a very short period of time. From her career, she has managed to earn an impressive income, however, her net worth and salary are not revealed. According to some sources, it has been reported that she has a net worth of around $0.5 million. She primarily makes money through her work in movies and TV series.  An actor in the US gets paid $50 thousand on average, so she also might be getting her salary in the same range.

Here is the list of her movie appearances which has earned a huge amount in box office earning.

Talking about the dating life of Poppy Drayton, she is possibly single. As she is a very private person, Drayton has not revealed about her past affairs and boyfriends to the media.

As she is in her initial phase of career, she must be busy focusing on her work rather than being in a serious relationship.

Check out her videos with Austin Butler talking about their character in The Shannara Chronicles.