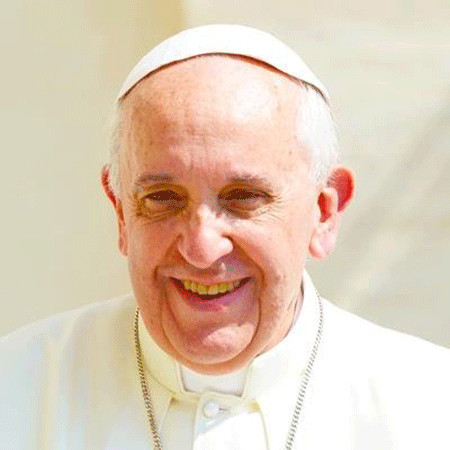 Born on 17th December 1936 in Buenos Aires, Argentina, Pope Francis is the first pope from Americas. On March 13, 2013, Jorge Mario Bergoglio became the 266th Pope of the Roman Catholic Church. He chose his papal name as Francis in honor of Saint Francis of Assisi. He was ordained as a Catholic priest in 1969 and has served as the provincial superior of the Society of Jesus.

Born to father Mario Jose Bergoglio and Regina Maria Sivori, Pope Francis was the eldest among the five children of his parents. However, Maria Elena Bergoglio is the only living sibling of Pope Francis. As a child, Jorge Mario Bergoglio went to Wilfrid Baron de Los Santos Angeles in Buenos Aires and attended technical secondary school in Escuela Tecnica Industrial n 27 Hipolito Yrigoyen. He is graduated with a chemical technician’s diploma. Prior to studying at Immaculada Concepcion Seminary, Bergoglio has worked in the food section at Hickethier-Bachmann Laboratory, as a bar bouncer and as a janitor sweeping floors.

Jorge Mario Bergoglio aka Pope Francis has studied at the archdiocesan seminary and after three years of his study, he entered the Society of Jesus as a novice. He confesses that while at the seminary, he had a crush on a girl and doubted on his religious career. Bergoglio completed his theological studies and ordained as a priest in 1969 by Archbishop Ramon Jose Castellano.

On 2001, Bergoglio was created cardinal by Pope John Paul II with the title of cardinal-priest of San Roberto Bellarmino. As a cardinal, he became known for his humility, social justice, and doctrinal conservatism. He led a simple lifestyle and used to travel in the public transport.

Jorge Mario Bergoglio became the 266th pope of Roman Catholic Church on March 12, 2013, at the age of 76 after the resignation of Pope Benedict XVI. He became the first pope from Souther hemisphere, from Americas, and from non-Europeans.

Even being a pope, he declined the facilities offered by the Vatican’s Apostolic Palace and chose to live a simple life returning to the boarding house where he had been staying paying the bills by himself. He broke the tradition that had been upheld by the popes for more than a century. Therefore, as the news came out that Pope Francis became the 266th Pope of Roman Catholic Church, the news on him swept the world with his simplicity and humbleness.

Pope as a Spiritual and World Leader

Pope Francis called for the peace in Syria in 2012 which was attended by 100,000 people. He implored on peaceful solutions between those involved in the conflict. He explained religious dialogue must be in a broader sense not just on issues like homosexuality and abortion.

Pope Francis said that the feminine genius is needed in the important decisions in a disagreement of women not to be ordained as priests where they are an essential part of the church. He also said that God in creation has set the people free so it is not possible