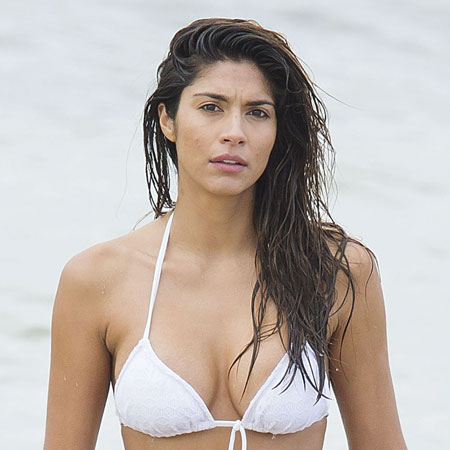 Born as Pia Loyola on 2 November 1983, Pia Miller is an Australian by nationality and Chilean by ethnicity. The zodiac sign of Pia Miller is Scorpio.

Pia Miller is a popular Australian model, Television show host and an actress. She particularly came into the limelight when she won the Dolly’s annual modeling competition.

Pia Miller was born to Angelica Blanco who was a fashion designer. When Pia was 4 years old, her mother moved to Australia with the family. Pia's mother played a major role in shaping her career as a model.

Pia Miller's mother admitted her to a modeling school when she was just 7 years of age. She attended National Institute of Dramatic Art in 2009 to take acting cla s s.

Pia Miller won a modeling competition when she was just 14 years of age after which she got a contract with the Chadwick Models. Within the next two years, she traveled to different countries for fashion shows. In 2001, Pia won the series titled Search for a Supermodel.

She has done advertising campaigns for famous brands including Myer, Mossimo, Midas, Australian Unity, Crown Casino and Jump. Apart from that, Pia Miller has also done Television commercials for Samsung and Cadbury. In 2010, she became the brand amba s sador of the Australian Grand Prix.

Pia Miller became the Australian celebrity tourism amba s sador for Chile in 2014. She has been involved in campaigns for Mazda CX-5 and also Maybelline cosmetics. She has appeared in Television shows including Postcards Victoria, The Circle and East West 101. Pia has worked in other movies and Television shows titled Big Mamma's Boy, Home and Away and Neighbours.

Pia Miller became the mother of first child when she was just nineteen years old. She was in a relationship with her boyfriend Brad Miller whom she married in 2007.

Pia Miller divorced her husband Brad Miller in 2015.  She has two children, whose names are Isaiah and Lennox. She was granted an Australian citizenship in the year 2010.

Standing five feet and nine inches tall, Pia Miller is quite a tall lady. She is 33 years of age now. Pia Miller looks extremely mesmerizing because of her sharp looks and her seductive body. She has a curvy body with attractive body measurements.

Information in detail about Pia Miller can be found on Wikipedia and other sites in the internet. She is also quite active on social media sites where we can find more updated information about Pia Miller. Her twitter handle is @PiaMiller_.