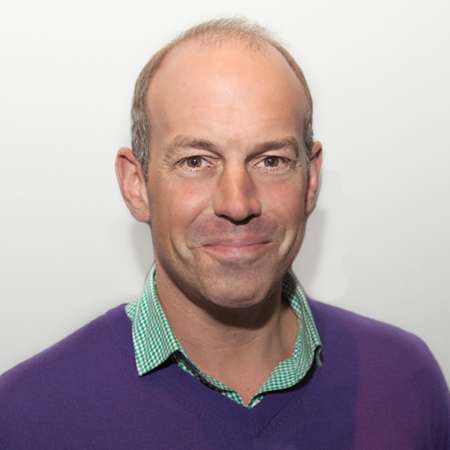 For more than 16 years he has hosted a number of TV series and relentlessly anchor for Channel 4. Apart from television, he regularly writes,publishes books and features for leading newspapers and lifestyle magazines.

Phil was born on 11th December 1969 in Littlebourne, Kent, England, UK. His parents had a farm in Littlebourne and spends most of his childhood with his another three siblings here. Nationally he is British and belongs to English ethnicity.

This talented personality studied at Uppingham School in Rutland, an education status for boys. In 1988, he left school after A-levels with a thought of either becoming an army or as a professional cricket player. He later taught sports as a teacher in a school on Australia's Gold Coast . He then joined the British Army for three months as a Potential Officers course and also played cricket for Kent in a junior county.

His interest in property developed when he worked for a short period of time in an estate agent in Canterbury. In 1992, he decided to decide to join University with a hope of pursuing a degree and attended London's Southbank University. In 1996, he earned Surveying degree, following that year Phil developed the company Garrington Home Finders.

The company was one of the very first property competent to functionalized in looking after the concern of buyers. But unfortunately, after running the company successfully for 13 years, in 2009, they faced credit crunch due to the financial crisis of 2007-2008. However, out of nowhere, it was saved by Spencer's former manager finally.

The television show 'Location Location Location' was born when a Scottish producer contacted Spencer and explaining that his expert in property related, would probably fit if they launched a program which thrills the audience and helps find homes for many couples searching for a house but has no knowledge about it. Spencer was asked to do a screen test as a presenter with Allsopp Kristie, the test incredibly got along well and the show emerges.

Later, the following year they launched another program called 'Relocation Relocation'. LLL is still running and they recorded 18th series already, making it on the UK TV. The show is now broadcasted around the globe in different 72 countries.

In 2010, Spencer and his screen wife Kristie established a production company called Raise the Roof Productions, along with their production partners Sarah Walmsley and Jane Muirhead as a co-founder. The company is located in Glasgow, Scotland.

Since then, he continued to present LLL, Phil Spencer: Secret Agent and Secret Agent Down Under. In April 2015, Spencer and Kristie present a new show titled 'Kristie and Phil's Love It or List It.'

Moving on to his personal life, Phil Spencer is a married to an Australian woman Fiona. The couple is blessed with two children, Jake Spencer, and Ben Spencer. He currently lives in Hampshire, South-East England with his family.

Phil sold his house in London, where the whole family used to live with 3.6 million and according to the report, he had a profit of 2.4 million. Phil has perfectly used his wisdom. The family moves to Hampshire, “For a change of life” as Phil said. He bought a house which contains 10 acres of land, cinema hall, tennis court, six bedroom which comes with en suit worth 3.35 million.

However, his net worth and salary are not highlighted by any source or by Phil himself, but one can imagine how much he had earned the past years. His luxurious classy house photos can be found on the internet.

Spencer is also a patron of the charity, to name a few: Mungos, a homelessness charity in London, Estate Agent Giving and Just Springers Rescue. He also served for 'SOS Children's Village' as an Ambassador.

In August 2014, during the Scottish Independence referendum, 2014, Phil was one of the 200 public figures to sign a treaty letter to the Guardian newspaper opposing the run-up. Phil Spencer's biography can also be obtained from Wikipedia and other bio-related websites as well.