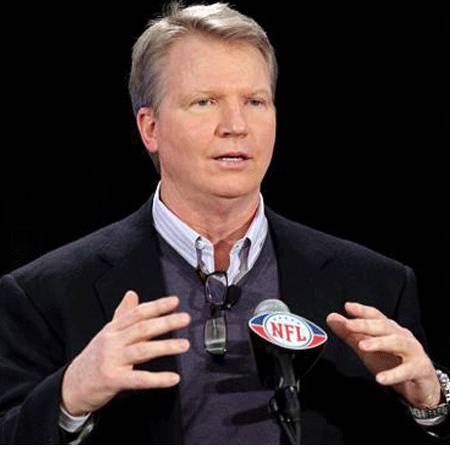 Phil Simms is a former American football player who is currently working as a television sportscaster for CBS network.  He played his entire playing career for the New York Giants.

Phil Simms was born on 3rd of November, 1954 in Springfield, Kentucky. As a young kid, he studied at St. Dominic's Elementary. He moved to Louisville Kentucky and then joined Southern High School for his higher studies.

Phil Simms joined Morehead State University for the degree and that is where he actually started playing college level football. He was noticed by the college coach and then in 1979, the new coach of San Francisco Bill Walsh flew to Morehead with his assistant to sign Simms for the third round draft. Surprisingly he was signed by New York Giants in the first round of the draft.

In his early days for New York Giants, Phil Simms appeared in 5 matches. He was named to NFL All-Rookie Team of the year in 1979. He was not much of consistent player in his first few seasons due to injury and fitness issues. In 1982, Phil Simms suffered horrific knee ligament injury during the preseason game against New York Jets and he had to be out from the squad for the whole season of 1982.

In 1985 season, Phil Simms won Pro Bowl most valuable player of the year award. He led his team to win 10 victories a season which was most for the Giants since 1963.

In 1987, New York Giants faced Denver Broncos in Super Bowl XXI which was the biggest game of Simms career. He gave great performance and his team won the game by 39-20 in which Phil Simms was awarded as most valuable player of Super Bowl XXI.

In his late playing career, Phil Simms kept fighting for the starting place for the Giants. He had a good 1988, 89, 90 seasons but his team failed to win anything and the case was the same for him individually.

Phil Simms played just 2 games till 13 weeks in 1992 season, but as the head coach was changed, Simms again found his place in the first team. He started all 16 games in 1993 season and after the season, he underwent shoulder operations. Phil Simms came back fit but then he decided to take retirement as a player in 1993 which ended his career of 14 years for the New York Giants. He was announced as New York Giants Ring of Honor after his retirement.

After retirement from playing,  Phil Simms first got involved with the ESPN but then he joined NBC with the broadcast crew to utilize his experience in media. Currently, he is working as the commentator of CBS and NFL Networks.

Phil Simms married his lover Diana and they have 2 sons and a daughter. Brian Toal is the name of Simms son-in-law who is a former linebacker in NFL. Oliver "Doc" Kuhn and John Simms "shipwreck" Kelly are the relatives of Phil Simms.

Phil Simms is a common name in the field of American football. He also badges the popular icon thus is estimated to have the huge amount of net worth. The former American Football player has total estimated net worth of $14 million.