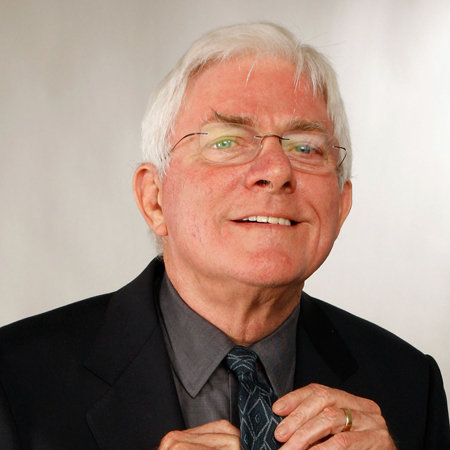 Phil Donahue is a writer, producer, writer as well as a creator and media personality known best for being the host of the syndicated show named The Phil Donahue show.

Phil Donahue is a versatile personality who is best known now for his work as a host and a creator of The Phil Donahue Show. He has been active in the journalism sector since 1957 and is an American national. He is the recipient of more than 20 Emmy Awards.

Phil Donahue was born as Philip John Donahue on the 25th of December, 1935 in Cleveland, Ohio. He did his primary schooling at the Our Lady of Angels Elementary School. He was enrolled in the St. Edward High School too and is a graduated in B.B.A from the University of Notre Dame

Phil Donahue’s career as a broadcast journalist started in the year 1957 whereby he worked as a production assistant for the KYW television and radio. He then became the stringer for the CBS Evening News and moved on to become the anchor in the WHIO-TV.  He has also hosted the show Conservation Piece in the WHIO Radio from 1963 to 1967.

After leaving WHIO, Phil Donahue started off The Phil Donahue show on the WLW-D TV. He also appeared as a contributor on The Today Show from 1979 to 1988 after which he co-hosted Pozner/Donahue on the CNBC from 1991 to 1994.

Phil Donahue returned to television after a hiatus of seven years on 2002 with the show called Donahue on MSNBC. The show was canceled a year later. He has also produced the documentary called Body of War.

Phil Donahue’s present wife is actress Marlo Thomas. The couple tied the knot in the year 1980 on the 21st of May. Before her, he was married to Margaret Cooney on 1958. The union, which ended in a divorce in the year 1975, had five children James, Mary, Daniel, Kevin, and Michael. Phil’s son James died of an aortic aneurysm at the age of 51.

As of now, Phil Donohue seems to be getting along pretty well with his wife Marlo and the couple resides together in Manhattan. With no troubles between them, it sure seems that the union is meant to last for a long time to come.

Phil Donahue has the net worth of a whopping $23.5 million dollars as of 2016. He has been paid a handsome amount of salary for his endeavors as a media personality and host. He has the height of 6 feet. He has been awarded a total of 20 Emmy Awards through his entire broadcasting career. Also the recipient of the Peabody Award, he has been inducted into the Academy of Television Arts and Sciences Hall of Fame.