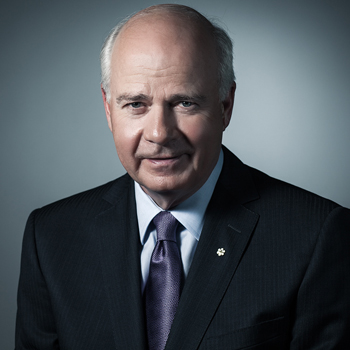 Peter Mansbridge is a well-known figure when it comes to English Broadcasting and news anchoring. He has worked for many years for CBC Network.

Mansbridge is the chief correspondent for CBC News, anchor of The National, and host of CBC News Network's Mansbridge One on One. He received 12 Gemini Awards for excellence in broadcast journalism and was also awarded Queen Elizabeth II, Diamond Jubilee Medal, in 2012.

Peter Mansbridge was born on 6th July 1948 in London, England to father Stanley Harry Mansbridge, D.F.C. who was an RAF Wing Commander, and mother Brena Louise Mansbridge. Peter is of Canadian nationality.

His father died in 2005 and his mother died shortly after 3 years of his father’s death. Peter has two siblings named Paul and Wendy. His father had served as a navigator aboard an Avro Lancaster bomber during World War II.

Peter moved to Ottawa, Canada, and began attending Glebe Collegiate Institution but dropped out even before graduating.  In 1966, Peter began serving in the Royal Canadian Navy.

Peter has also joined Trinity College School based in Port Hope, Ontario, and graduated in 1967. Peter then began working as a ticket agent for Transair at Churchill Airport based in Churchill, Manitoba.

Peter started his career as a ticket agent for Transair at Churchill Airport in Churchill, Manitoba.

Peter has worked successfully in his journalism career and has gathered many accolades including an honorary doctorate from Mount Allison University, University of Manitoba, Ryerson University, and many others.

A year later while Peter was making a flight announcement, a station manager for the local Canadian Broadcasting Corporation (CBC) named Gaston Charpentier discovered him and hired the then 19-year-old Peter as the host of CHFC’s late-night music program.

Peter then moved to Winnipeg in 1971 to continue reporting for the CBW radio station. He later went on to join CBWT-TV as a reporter. A few years later, Peter became a reporter for the CBC’s flagship evening news program The National in Saskatchewan.

Peter again shifted back to Ottawa in 1976 to become a parliamentary correspondent. For a whole decade, he covered news related to politics and subsequently became a substitute anchor for fellow Canadian Knowlton Nash.

After working there, Peter was offered a job as a co-anchor for a morning show in 1998 by CBS. Nash retired from his anchoring job at the CBC in order to keep Peter in Canada.

Peter went on to debut as the sole anchor of The National on 1st May 1988 and later began serving as a co-anchor for CBC Prime Time News from November 1992 to fall 1995.

During his time as an anchor, Peter covered Canadian News stories which included famous happenings like federal elections, party leadership conventions, and negotiations of the Meech Lake Accord, as well as the Charlottetown Accord, the Quebec referendum back in 1995, even the disastrous floods in Manitoba, ice storms that occurred in 1998 in Ontario and Quebec.

Peter has also anchored the coverage of several worldwide events on studio and the scene including the well-known Gulf War, the War in Kosovo, the September 11 incident, and the Parliament Hill Shooting in 2014.

Peter has covered famous events like the fall of the Berlin Wall, the funeral of Diana Princess of Wales, and Pope John Paul II along with various royal and papal. He has anchored the coverage of the Olympic Games and the inauguration of U.S. President Barack Obama as well.

Peter went on to launch a new program in 1999 entitled Mansbridge One on One where he interviews newsmakers.

Peter Mansbridge's Net worth, Salary, and Net worth

Peter Mansbridge stands tall at the height of 6 feet. The renowned Canadian television personality earns an impressive volume of salary and thus Peter Mansbridge's net worth is in a jaw-dropping figure.

During the time in the University as a chancellor, Peter Mansbridge's salary was said to be 80,000 USD according to some sources. As of 2018, he has an estimated net worth of $10 million that has been garnered from his long professional life before getting retirement.

Peter has seen it all and has been working very hard but his salary doesn’t match the salary of other anchors of the present day.  Peter is the recipient of many awards including 12 Gemini awards.

Peter has been married three times in his life. Peter married Parm Dhillon and gave birth to two children and then separated with Parm in 1975. He previously married CBC colleague Wendy Mesley on 6th January 1989.

Peter and Wendy went through a divorce in 1992 which became a huge media feed. He is currently married to Canadian actress Cynthia Dale on 14th November 1998. The couple has a son named William born in 1999.

He has a summer cottage in the Gatineau Hills and he currently lives in Stratford with his family.