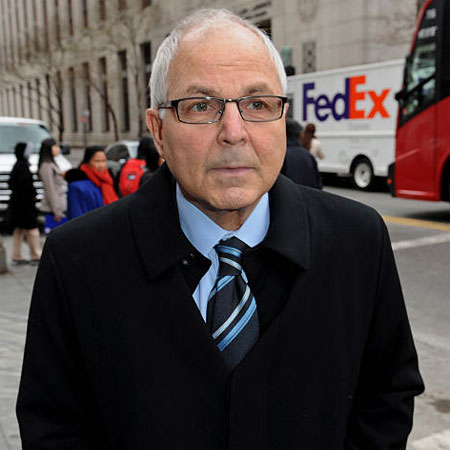 Peter B. Madoff is a former Chief Compliance Officer who worked with his brother Bernie Madoff for more than forty years and ran operations for the past 20 years. He is the second head figure of one of the most notorious Ponzi scheme in history to be sentenced.

Peter Madoff was born in 1953 in the United States of America. He is of White ethnicity and holds American nationality. He finished his bachelors' degree from Queens College and graduated from the Fordham University School of Law.

Madoff worked as a director of the National Stock Exchange, and director of National Securities Clearing Corporation.  He stepped down from the Board of Directors of the Securities Industry and Financial Markets Association in 2008 December.

He became infamous after being disclosed as a figurehead in a Ponzi scheme of billions of dollars conducted by his brother Bernard L.Madoff, the scheme collapsed in December 2008.

Madoff is a lawyer by training and was sentenced to 10 years in prison in 2012 for various crimes including fraud. his brother, Bernard Madoff, the mastermind behind the scheme pleaded guilty in 2009 and is currently serving his 150 years sentence in jail.

Peter Madoff confessed to helping his brother cover up the most notorious Ponzi scheme in history. He admitted that he lied to clients and the Internal Revenue Service while working together in their financial firm.

Madoff confessed to a range of crimes, including lying to securities regulators, falsifying documents and filing sham tax returns. According to the prosecutors, he had properly done his job as the chief compliance officer at Bernard L. Madoff Investment Securities.

Madoff's lawyer, John R Wing, showed his client as a member of a charitable family, and loving man who was betrayed, bullied and destroyed by the imperious older brother who he had idolized all his life and who his mother loved more than she loved Peter.

In pleading guilty, Madoff agreed to the ten-year imprisonment sentence. He also admitted hiding millions of dollars from the I.R.S to avoid taxes and taking $200,000 from the firm for donations even after their fraud was caught.

Peter Madoff owned a home in Old Westbury, New York, worth $5 million. He also owned a mansion in Palm Beach Florida worth $4.2 million, which was transferred to his wife on 8th November 2006, along with a vintage Aston Martin.

Madoff also served as director of Cohmaed Securities Corp and benefitted from the earnings. Madoff's temporarily seized assets that he previously ordered were modified to be allowed to use up to $10,000 per month as living expenses. The assets included mortgage, insurance premiums, and loans.

When Madoff was sentenced to ten years prison. He received a forfeiture order of $143 billion. The government set high amount of the crime's proceeds in order to seize all of his and his family's assets and returned back to the victims.

Madoff's forfeiture led him to give away all of his assets to the government including, cars homes, cash, and Rolex watch. It also included assets of his wife and daughter and other family members. He owned several cars including a vintage Aston Martin.

Mr. Madoff worked with his brother for 40 years. Though Bernard Madoff was the firm's owner, he paid a huge amount of money to Peter Madoff. The government also stated that Peter took $40 million as compensation from 1998-2008.

The money was spent on Peter and his wife Marion Madoff's personal use. Their expenditure includes homes in Palm Beach, Old Westbury, New York, and on Long Island, also an apartment on Park Avenue worth $4 million.

Due to the forfeiture and the ten years prison, Madoff's net worth is in negative figures.

Peter B. Madoff is a married man. He is married to Marion Madoff. The couple had two children, their son c Roger Madoff died a couple years ago. He has a daughter named Shana Madoff.

His daughter Shana Madoff is a former American attorney currently serves as a yoga teacher. His daughter is married to Eric Swanson and has two children with him.