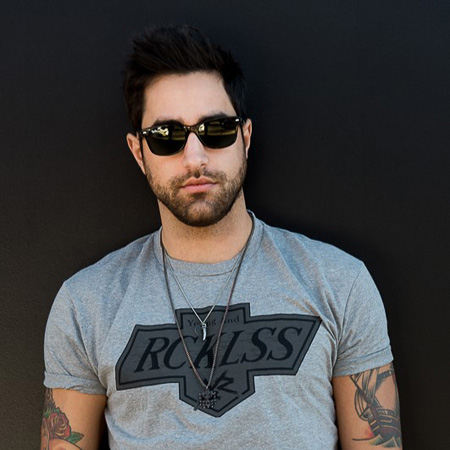 Paul DiGiovanni is popularly known as the lead guitarist and backing vocalist of American pop rock band, Boys and Girls. He has his clothing brand, Black Carbon Custom which offers shirts.

Paul DiGiovanni was born on January 19, 1988, in Leominster, MA. He holds an American nationality and belongs to the white ethnicity. His zodiac sign is Capricorn.

Paul is interested in music since his childhood that inspired him to pursue his career in music. He is one of the band members of a famous Rock band, Boys Like Girls. He is the lead guitarist of the band.

DiGiovanni was introduced to the band in 2005 when he was brought by his bandmate John Keefe to help Martin Johnson for recording. Prior, he along with drummer, John, recorded a brief demo like;  Free, If You Could See Me Now and The Only Way That I Know How To Feel.

However, when the demo took off, he ended up with staying with the band and still, he is a part of the group. He has given numerous hits with his band. Later, he started giving back vocals too.

Moreover, he has his clothing brand named, Black Carbon Custom. On March 17, 2011, DiGiovanni appeared on The Gunz Show where he announced about his dream clothing brand. His clothing line offers four designer shirts, Black Burn, Bombs, Burning World and Snake, and a hoodie, Shut Up and Color.

Paul is in a relationship with her long-term girlfriend, Katie Stevens. The duo first encounters with each other in 2014 through mutual friends and later they officially announced their relationship.

He often shared his picture along with Katie on her Instagram posts. The duo is together since a long time and they shared a good equation.

As a lead guitarist, DiGiovanni earns a good amount of money from his career. Even though there is no concrete figure about his net worth, it is certain that he has accumulated a net worth of millions.