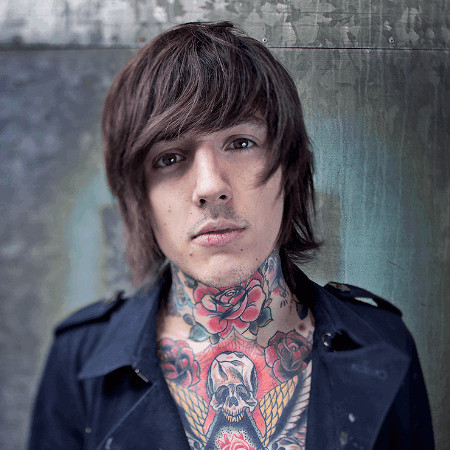 Born in Ashford, England, 29 years old handsome singer of British nationality Oliver Scott Skyes, known as “Oli Skyes” is the lead vocalist in the boyband Bring Me the Horizon. He is also the founder of the company called Drop Dead Clothing. Oli can play guitar and keyboards as well. Till date his band has released five discographies entitled, Count Your Blessings in 2006, Suicide Season in 2008, there is a Hell, Belief Me I’ve Seen It. There Is a Heaven, Let’s Keep It a Secret in 2010, Sempiternal in 2013, that’s the Spirit in 2015. He was born to father Ian Skyes and mother Carol Skyes. He has one sibling named, Tom Skyes.

When he was a kid, he moved to Australia with his parents for about six years. He had attended his kindergarten in Australia. He was eight when the family returned to the United Kingdom and settled in Stocksbridge in Sheffield. He attended Stocksbridge High School. He was fond of music since his childhood. Therefore, while he was still in school, he began to craft the CD compilation and short tracks under the name Quakebeat.

He has also played as mock hip-hop band “Womb 2 Da Tomb” with his brother Tom Skyes and his fellow bandmate Mat Nicholls from the band Bring Me the Horizon, Neil Whiteley from metal band “Purple Curto” under the pseudonym “Olisarus”. He has always dreamt of making his career in music and he is quite successful too. He has received Album of the Year award in 2014 Alternative Press Music Awards.

Talking about his personal life, Oli has suffered from the Sleep Paralysis, which is the inability to move during sleep since he was 12. He turned vegetarian since 2003 after watching a documentary online about the animal cruelty. He turned vegan in 2013 and is an atheist quoting as “I don’t believe in God. I was asked to believe him when I was in a bad place. I couldn't understand why I needed a god or, in my opinion, something that doesn’t exist.’

He was a drug addict and had had went to rehab as well. He tells that after rehab all he wanted to do was to sing. Moving more on to his personal life, there is no any history seen on his relationships or any girlfriend. He is a married man now. The name of his wife is Hannah Pixie Snowdon.

They got married in 2015 July 12, Tuscan, Italy. They do not have any child now and there is no any news yet. Therefore, we can presume, they might want to continue their career first or are planning in some time future. He is living happily with his wife and since both are loving, caring and understanding to each other, there is no any chance of their separation or divorce in any time.

There is no any rumor heard on him so far but he has been the controversy in the video with Architects. It was during the 2008, where the band Bring Me the Horizon and band Architects filmed two films where the first video showed a fight between the leads of two bands and in the second video it showed an ambulance supposedly Skyes inside it which caused the fans of Bring Me the Horizon sending the hate mail to the Architects lead singer Carter. For this, they later revealed those were the stunt staged by both bands and are good friends.

Secondly, he was pulled in moshing controversy where Skyes and his bands were sued by the parents of the 12-year-old girl who got injured in the mosh pit while she was watching the band performance. Therefore, he tweeted, he will not be able to do the moshing activity legally during his concerts but later the suit was dropped from him.

He belongs to the labels like RCA, Columbia, Sony, Epitah, Shock, Visible Noise, Erache and Thirty Days of Night.

He is a handsome man and is a heartbeat of many of his female fans. He has a good height of 6 feet and one inch with the accompanying body weight. He has lots of tattoos on his body. He has a very good net worth and earns a handsome salary.