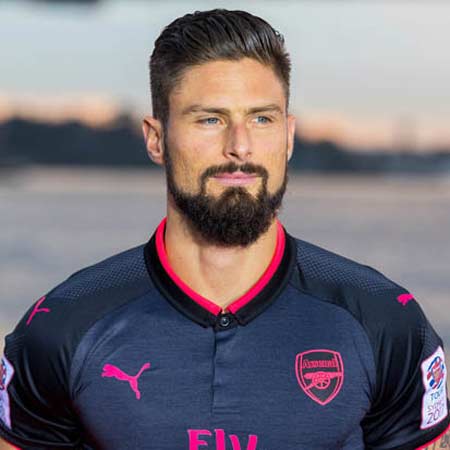 One of the finest goal poachers of the game Oliver Giroud is French footballer who plays as the center forward for French National team and English club Chelsea FC. He spent five and a half years playing for Chelsea arch-rival Arsenal FC and scored over 100 goals in 253 appearances. Giroud's famous scorpion kick goal against Crystal Palace in 2015/16 season was hailed by Arsene Wenger as one of the greatest goals he has seen. The goal later received FIFA Puskas award as the best goal of the year. Besides being goal poacher Giroud has incredible holdup play and amazing fitness. He was one of the few consistent players of injury-laden Arsenal squad.Giroud was voted "Hottest player of the Premier league'" in 2015.  He is also a part-time model and the face of Boss Men's perfume.

Oliver Giroud was born on September 30, 1986, in Chambery, France. He was raised by his grandparents in the nearby village of Froges. Giroud also has a big brother ten years senior to him named Romain Giroud who was also a professional footballer and played with the likes of Thiery Henry in his youth career. He quit football to be a nutritionist. He was a big inspiration for Oliver to kickstart his football career.

During his early years, Giroud began his career at his hometown club Olympique De Frogs and later joined the Academy of Grenoble at the age of thirteen.  After spending his teenage years at Grenoble, he signed his professional contract for Grenoble at the age of 21.  After scoring 15 goals in 15 matches for Grenoble youth side he was promoted to senior team from 2006/07 season.

He made his full debut against FC Niort in a 2-1 defeat where he played entire ninety minutes. On 26 February 2007, he scored his first goal for the club which was injury time winner against Le Havre. In his first season at Grenoble, he scored two goals in 18 appearances.  To gain some playing time next season he was loaned to Istres who were playing in the third division of French Football. After successful loan stint scoring 14 goals at Istres, he returned to Grenoble but was surprisingly put on the transfer list.

On May 2008 he was transferred to Tours Fc who was playing second division football in France. He made his league debut for Tours in 1-0 win against Niom and scored his first league goal against Lens. In his two seasons at Tours, he played 67 games scoring 36 goals in all competitions. In his second season at Tours, he was named Ligue 2 player of the year. 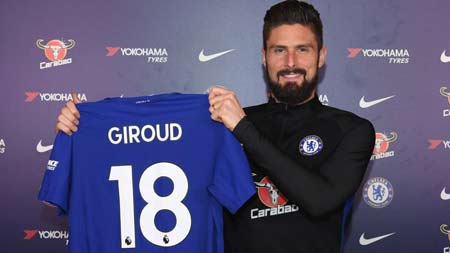 In June 2010 Giroud was transferred to Montpellier and made his debut in European match against Hungarian Club Gyori Eto in which he scored as well. Giroud's highlight of the career during Montpellier days include a match-winning goal in extra time to send Montpellier to the finals of French Cup since 1993/94. He also scored two hat-tricks in his next season against Dijon and Sochaux. In his total two seasons at Montpellier, he scored a total of 39 goals in 85 appearances.

On June 26, 2012, Giroud was signed by London club Arsenal FC for a fee believed to be around $14.8 million. He made his club debut for Arsenal in a goalless draw against Sunderland in the Premier League.  He scored his first premier league goal against West Ham United in a 3-1 win. He scored his first Champions League goal of his career against German opponents Schalke 04 in a 2-2 draw. Giroud finished his first season at Arsenal FC scoring 17 goals and providing 11 assists in 47 appearances for the club.

In his next season at Arsenal, Giroud won the FA Cup with Arsenal ending a long run of trophy drought for Arsenal. In his 51 games, he scored a total of 22 goals in all competitions. Giroud started 2014/15 season with a bang scoring in a 3-0 win against Manchester City in Community shield which was a 25-yard stunner. Giroud also scored Arsenal's fourth goal against Aston Villa in the Final of FA cup in a 4-1 win which was back to back FA cup win for Arsenal. He finished the season with 19 goals in 36 appearances across all competitions. 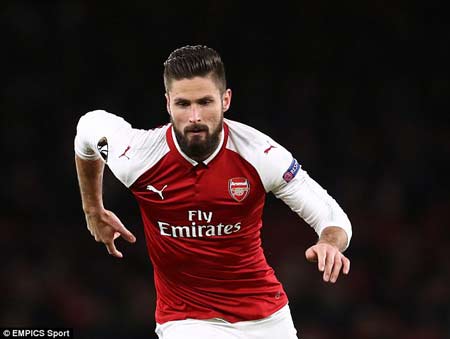 In 2015/16 season Giroud scored his first competitive hat-trick for Arsenal in a 3-0 win against Olympiakos in UEFA champions league. After scoring goals against Aston Villa, Giroud became the only 7th player in the history of Arsenal to score more than 50 goals for the club. Giroud finished the season with a hat-trick against Aston Villa and ended the season with 24 goals in all competitions. His final full season at Arsenal (2016/17) started poorly as he made only 3 appearances in 9 matches. However, he finished the season with 16 goals in all competitions.

After playing half of the 2017/18 season with Arsenal, Giroud was transferred to another London club Chelsea FC for an undisclosed fee on winter transfer window. He scored his debut goal for the club in a 3-2 win against Southampton inspiring a comeback from 2-0 down.

Giroud did not represent France in any of the youth ranks.  He was called for his first appearance for the national team in November 2011 after his impressive performance for Montepellier. He made his debut for France against the United States in a 1-0 win.  On 29 February Giroud scored his first goal for France in an International friendly match against Germany in a 2-1 victory.

Giroud also featured in FIFA world cup 2014 for France national team. He scored his first world cup goal against Switzerland. Giroud earned his 50 caps for French National team playing against Romania in the opening match of Euro 2016. France reached the final of the tournament eventually losing to Portugal. He was the joint second highest goal scorer of the tournament and won Bronze boot.

Giroud has also featured in qualifying matches for Worldcup 2018 Russia. He scored twice in a match against Luxembourg in which France won 3-1 taking his total goal tally to 23, moving into country's top ten goalscorers of all time.

In his 71 appearances for France, he has scored over 30 goals.

Oliver Giroud's Net Worth And Salary

Giroud earns $163,132 per week as salary from Chelsea FC. Previously he earned the same amount from Arsenal FC. His estimated net worth is estimated to be $7.16 million dollars. Most of his incomes are through salaries of the club, national team, and endorsements. He was also featured as the model of Boss men's perfume and is endorsed by Nike.

Oliver Giroud married Jennifer in the year 2011 in a private ceremony with few attendees.  The couple has one son and one daughter. Thier first daughter named Jade Giroud was born on June 8, 2013. Relating to parenting experience he described how difficult it was to raise a child after the birth of Jade. The couple announced the arrival of a boy on the red carpet of Global gift gala in London when Jeniffer was still pregnant. On March 2017 she gave birth to Evan. Giroud celebrates most of his goals dedicating to his son.

In February 2014 Giroud was caught cheating with his wife with model Celia Kay. After the incident, he apologized to his family via Twitter.  Apart from football, skiing is Giroud's 2nd passion.