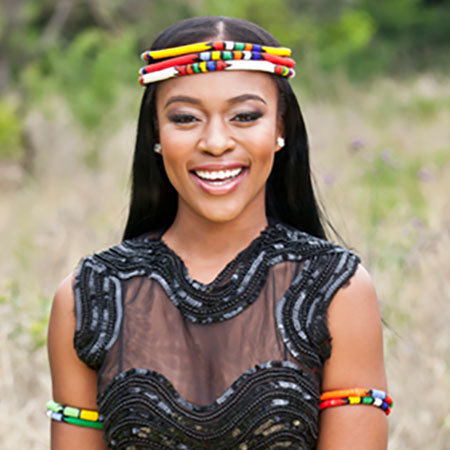 Twenty-nine years old Nomzamo Mbatha is a young South African actress, African accountant, model, and television personality best known as one of the three finalists of the 2012 MTV Base VJ Search.

Nomzamo Mbatha birth name is Nomzamo Nonzwakazi Nxumalo Mbatha and was born on 13 July 1990, in KwaMashu, Northwest Durban, KwaZulu-Natal. Her father's name is Skuta Nxumalo and her mother is Manatuku Mbata. She has one sister named Carla; however, she lost her lovely sister at the end of 2014. Nomzamo Mbatha revealed that behind the bubbly personality and contagious smile lies a broken woman.

Nomzamo Mbatha attended Bechet High School in Durban. After she completed high school, she earned a bachelor's degree in Commerce and Accounting from the University of Cape Town and the University of South Africa.

Career as Model, Actor As Well As Accountant

In 2012, her journey to fame began after she made it to the finals of the MTV Base VJ. Despite not winning the competition, she came into the limelight

Nomzamo Mbatha explained that she is only interested in challenging roles in her interview with Bonang Matheba. She featured as Khwezi in 2015, an orphan from KwaZulu-Natal, who was adopted by her uncle as a teenager and is the potential third wife in a polygamous marriage.

For her hard work once she was nominated by African Movie Academy Award for Best Actress.

As of 2019, Nomzamo Mbatha has a net worth of $500 thousand from her several careers.

However, as of 2019, they have already called off their relationship. Curre ly Nomzamo is leaving a single life.