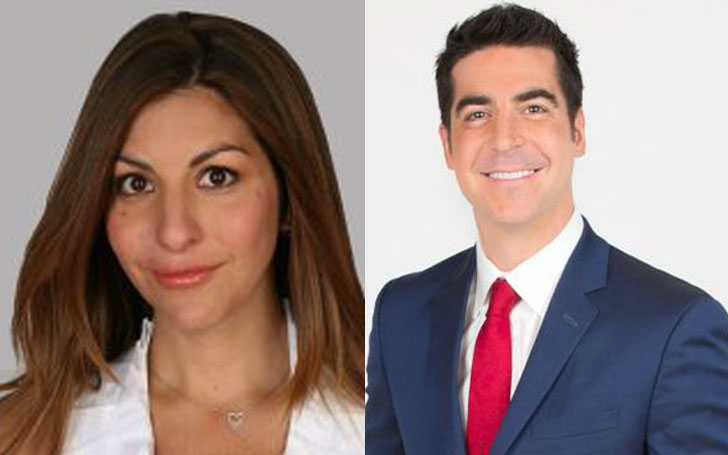 Noelle Watters, the wife of Fox News journalist Jesse Watters, is former a fashion stylist host who hosted Fox's iMag fashion show in 2011.  She has, nonetheless, gained both media and public attention following her marital relationship with Fox News Channel's political commentator Jesse Watters in the year 2009. She has twin daughters named Sophie and Ellie with Jesse. What else is she doing these days? Let's explore!

Noelle Inguagiato Watters is a style guide host and a wife of Jesse Watters. She married her long-term boyfriend Jesse Watters in 2009.  Their marriage was a very private affair, information about marriage events hasn't been revealed.

Also read: How much is Jesse Watters Net worth? Know about his Career and Awards

It has been reported that the two met for the first time at Fox News. Noelle served with Fox News at its advertising and promotions department. She also hosted a web fashion show called iMag Style for the media outlet and it was there the two met first.

Noele and Jesse have managed to keep their marital status and family life low profiled. The couple has been married for seven years now, they shared a photo on Facebook wishing Valentine's day in 2017.

However, they are proud parents of twin daughters Sophie and Elle. There have been no controversies about cheating, affairs or divorce yet. They are definitely a happy couple.

Noelle’s husband Jesse Watters is a critic on the Fox News Channel based in Philadelphia, Pennsylvania, U.S. Watters, 38, was known for appearing on The O'Reilly Factor.

Her husband, Jesse Watters is known for his on-the-street interviews and featured in his own segment of the show, “Watters’ World”. Wish to know five facts about Jesse Watters, watch the below video.

In 2013, in an episode of Fox & Friends, Jesse revealed that his mentor, Bill O’Reilly, didn’t attend his wedding ceremony. O'Reilly is a former Fox journalist, who was fired from Fox in March after being involved in sexual harassment with five women.

As Walking Points Memo reports in 2014, Jesse revealed to Outnumbered that Noelle told him that she voted for President Barack Obama in 2012.

“When I was dating my wife, we were very simpatico politically”

Nevertheless, it’s worth noting that Politico reported back in 2012 that an FEC filing revealed that Watters donated $500 to the Obama Victory Fund in 2012 and even listed “News Corp” as his employer.

They used to live together with their children on Long Island. Noelle's relationship with her ex-husband Jesse attracted media attention after it was revealed that he started dating Emma DiGiovine, a 25-year-old producer working on his show.

After years of their marriage, Noelle Watters filed a divorce in October 2017. She accused her husband of cheating her with a 25-year-old associate producer of Watters' World named, Emma DiGiovie. As per reports, the two were on a Caribbean vacation together and even shared photos of their time together on their social media.

Soon after the rumor, DiGiovie was transferred to The Ingraham Angle. A Fox News spokeswoman spoke about Watters and DiGiovanni's relation,

''Within 24 hours of Jesse Watters voluntarily reporting to the Chief of Human Resources in November 2017 that he was in a consensual relationship with a woman on his staff, management met with both parties and a decision was made for the woman to be transferred to work on another program on the network where she currently remains.''

As per some sources, they are still having an affair. But Jesse has not disclosed anything regarding his extra-marital affair. A year after she filed for divorce, the estranged wife of Fox News commentator Jesse Watters is seeking counsel fees from her estranged husband for her legal fees while the case is pending. The judge presiding over the case and no decision was made.

But it is yet to be revealed what Noelle is doing now and is she dating anyone at present. Following her separation from her spouse, she is totally away from the media.