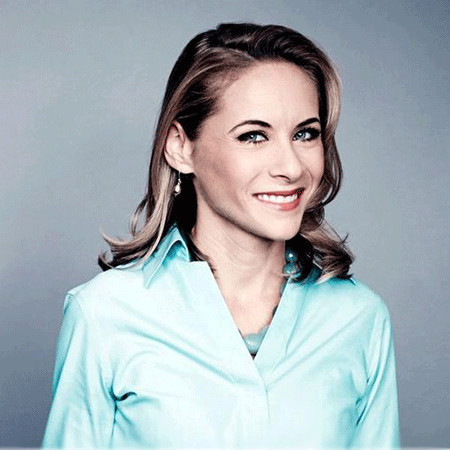 A business anchor and correspondent for CNN, Nina dos Santos hosts the CNN network’s twice-daily business show World Business Today. She is one of the experienced journalists in CNN network based in the UK. She is a London-based CNN’s correspondent. She also regularly presents various feature shows and doc u mentaries. She is also a host of “CNN Money View with Nina dos Santos”.

There is no information available on her early life. Information on her birth and her family background are a complete mystery. However, from her CNN profile, it is revealed that Nina Santos is half English and half Dutch and can speak five different languages viz: French, Spanish, Portuguese, German and Italian. Nina do Santos received her Bachelor’s degree in Biological Sciences from Imperial College, London and has completed Master’s degree in Economics.

Nina dos Santos started her career in print news as an intern at the Financial Times Group and Dow Jones & Co. After completing her time as an intern, she moved into the broadcast news as a presenter for Bloomberg Television. After working there for some years, she moved to Sky News and then to NBC News. Filling her up with experiences and skills, Nina moved to CNN as a news host.

With CNN, Nina dos Santos has anchored a number of major news events including London Olympic Games, Arab Spring uprisings, 2011 Japanese Tsunami and many others. She was in the CNN team for covering the Royal Wedding. She has also covered World Economic Forum in Davos and general elections of Germany, France, Italy, Greece and Russia.

There is no information regarding Nina dos Santos’ salary and net worth. However, looking at her work and involvement, it can be a s sumed to be high and surely is paying off her hard work.

Since there is very less information available on Nina dos Santos and Nina herself, being a secretive person, tracking down her personal life has been very hard. However, looking at her Twitter account, it can be said that she is married for she had tweeted “ @VisitADae thanks! My husband was brought up in Abu Dhabi and he’s a huge fan.” Nina has not disclosed the identity and details of her husband.

Nina dos Santos has also been a mother. There are news and tweets of her on her baby shower and maternity leave on the internet that happened on late 2015. Other than this, there is no information available on her personal life. Her past affairs and boyfriends are in a complete shade.

Nina dos Santos is available on Instagram and Twitter. She also has a LinkedIn profile. There is very less information available on her on the internet. Her biography on the popular internet site Wikipedia and IMDb is also lacking.