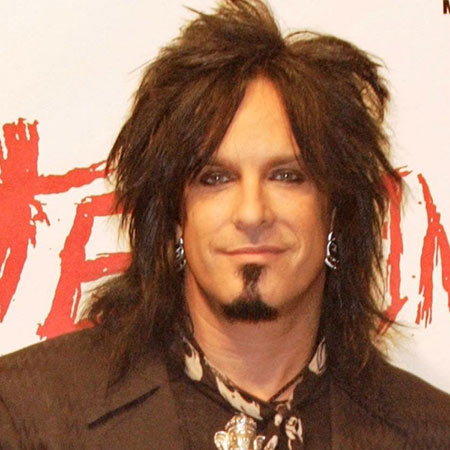 Nikki Sixx, born as Frank Carlton Serafino Feranna, Jr., is an American musician, songwriter, radio host, and photographer. He was born on December 11, 1958, in San Jose, California. He is best known as the bassist and primary songwriter of the band Mötley Crüe.

Nikki Sixx is of Italian ancestry on his father's side and was partially raised by his single mother, Deana Richards. He later moved in with his grandparents after his mother abandoned him. He relocated several times and while living in Jerome, Idaho, he became a teenage vandal.

He broke into homes, shoplifted, and sold drugs at school, which got him expelled. Nikki learned how to play the bass guitar having bought his first instrument with money gained from selling a guitar he had stolen.

Here is a video of Nikki Sixx net worth:

Nikki Sixx grew up listening to artists like Deep Purple, The Beatles, Harry Nilsson, Elton John, The Rolling Stones, Queen, T.Rex, David Bowie, and Slade. At the age of 17, he moved to Los Angeles and did various jobs like working at a liquor store and selling vacuum cleaners over the phone.

At the same time, Nikki Sixx auditioned for bands. He first joined 'Sister' but was later fired along with Lizzie Grey. They formed a band 'London' before he eventually left the band to form 'Mötley Crüe' with drummer Tommy Lee.

In 2000, Sixx formed the internet-based side project 58 with Dave Darling, Steve Gibb, and Bucket Baker. They released a single album ‘Diet for a New America’. In 2002, Sixx and Tracii Guns formed Brides of Destruction. They released two albums, ‘Here Come the Brides’ and ‘Runaway Brides’. In 2006, he formed the group ‘Sixx: A.M.’ with James Michael and DJ Ashba. They recorded and released The Heroin Diaries Soundtrack in August 2007 through Eleven Seven.

Sixx was married to Playboy Playmate Brandi Brandt from 1989 to 1996. They had three children Gunner Nicholas Sixx, Storm Brieann Sixx, and Decker Nilsson Sixx. After that, he got married to Donna D’Errico and had a daughter, Frankie-Jean Mary Sixx, with her. They got divorced in June 2007. From 2008 to 2010, his girlfriend was Kat Von D. After their breakup, he dated Courtney Bingham and later, she became his wife. He currently has a net worth of 45 million dollars.