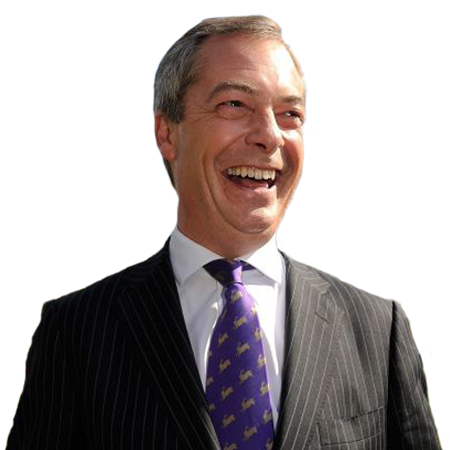 Nigel Paul Farage is a British political analyst, broadcaster as well as a politician. He is the co-chairman of the Europe of Freedom and Democracy group. He is also an MEP of South East England since 1999.

Nigel Farage was born on 3rd April 1964 in Downe, Kent, United Kingdom. He was brought up in Kent. Barbara and Guy Justus Oscar Farage are his parents. Nigel’s father used to work in the City of London as a stockbroker. His father left the family when he was only 5 years old.

Nigel Farage went to an independent school named Dulwich College from 1975 to 1982. Farage holds a British nationality and falls on a white ethnic group.

After leaving school Nigel did not go to college he rather decided to work. he began his career from the Drexel Burnham Lambert, an American commodity operation of brokerage.

Nigel is the founding member of UKIP. Before that, he was in the Conservative Party and he left the party in 1992. He became the UKIP Leader in 2006 September.  He led the part through 2009 European Parliament Election.

The part at that time won the second highest share of the popular vote by defeating the Liberal Democrats and Labor by over two million votes.

Nigel Farage successfully stood in the 2010 UKIP leadership contest in November 2010. In 2015, he resigned from the post as he could not win the South Thanet seat in the Kent at 2015 general election.

In 2013 October, Nigel Farage was ranked second in The Daily Telegraph’s Top 100 most influential right-wingers poll. In 2014, he was also named as Briton of the Year by The Times.

The 53 years’ politician, Nigel Farage is married twice. His first wife was an Irish nurse named Grainne Hayes. The couple married in 1988 and the couple divorced in 1997.

He has two children from his first wife. His first child is Samuel born in 1989 and another child is Thomas born in 1991.

After two years of his divorced with his first wife, he married to a Germany girl named Kirsten Mehr. He has two children from his second wife named Victoria born in 2000 and Isabelle born in 2005.

In 2017 February, Nigel’s second wife Kirsten said to the Press Association that they are living separate lives. She also said that her husband had moved out of the family house a while ago.

Kirsten said that behind the separation between her and her husband is that Nigel is sharing a 4-million-euro pad with some French politician.

Nigel Farage is a keen cricket fan. Being a cricket fan he appears in a number of cricket matches. He likes to fishing alone at night and it makes him relax.

He is a smoker and is fond of beer. Nigel Farage resides in a hamlet in the London Borough of Bromley, Single Street.

Nigel Farage was hit by a car on 25th November 1985 after a night out. He was injured in his left leg and head. For 11 months, he was in casts and fortunately, he recovered. The nurse who treated Nigel was his first wife.

Nigel Farage first found the symptom of testicular cancer on 26th December 1986. Later on, his left testicle was removed and cancer could not spread to any other organ.

The 53 years politician estimated net worth is $5.76 million. He often discusses his income so it is known that in past 15 years he earned $4 million. His early income from his job a leader of UKIP is about $70 thousand.