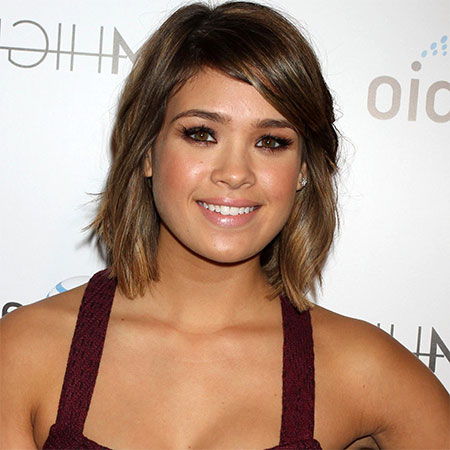 Nicole Gale Anderson, an American actress, is famous for her role as Heather Chandler on The CW series ‘Beauty & the Beast’. She is also notable for her roles as Kelly Parker on ‘Make It or Break It’ and as Macy Misa in the Disney Channel Original Series ‘Jonas’.

Nicole  Anderson was born on August 29, 1990, in Rochester, Indiana. Her mother is of Filipino ethnicity and father is an American, who served as a Commander in the United States Navy. She has two siblings; a brother named Kenn Anderson and sister named Nadine Anderson. In her childhood,

Nicole Anderson was awarded a scholarship by Georgia’s Barbizon Modeling and Acting School when she was at the age of 13. She then started to study acting and attending auditions. After some time. she landed on several television commercials and print ads, which included including 'Every Girl'. 'Stand up', 'Mary-Kate & Ashley Online clothing', and 'Bratz Pretty ‘n’ Punk & Treasures'

Nicole Anderson started her acting career by auditioning for the role of Stella in the television series 'Jonas'.

On March 2012, Nicole Gale Anderson was added to the cast of the TV show 'Beauty and the Beast', playing the recurring role of Heather Chandler. Later on, Anderson joined the cast of Ravenswood and Pretty Little Liars spin-off as Miranda Collins.

Before appearing in Ravenswood, she appeared in one of the episodes of 'Pretty Little Liars' as Miranda Collins. However, after the cancellation of Ravenswood, Nicole returned for the third season of 'Beauty & the Beast' as a regular cast member.

Nicole Gale Anderson was in a relationship with Cody Linley in 2000 after meeting him at a Disney Event. After five years of relationship,  the pair broke up in 2005. Later, Nicole got involved with Tony Oller who was months younger than Nicole and they also separated after some time.

In 2010, Anderson started dating Stephen Laurenson but the relationship did not last long. Currently, Nicole is in a relationship with 26-year-0ld American singer James Maslow. The duo has been spotted at several public places together and they look very sexy as a couple.

Gorgeous and Talented Nicole Gale Anderson currently resides in Toronto, Canada. She is a very stunning actress with the height of 5 feet 3 inches and weight of about 54 kg.The net worth of estimated to be around $1 million dollars.

Actress Make It or Break It