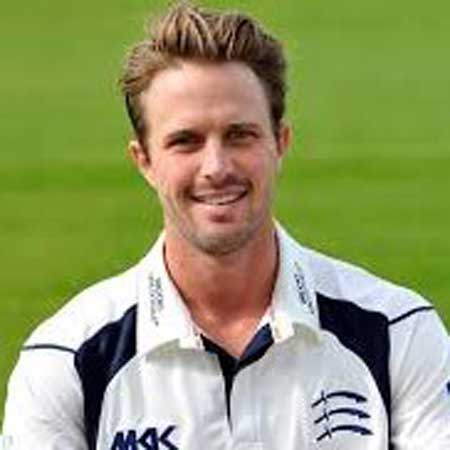 Nick Compton is a professional cricket player who plays for Middlesex representing England. He has represented England in 13 Test matches as a right-handed top order batsman and occasional right-arm off spin bowler. He has been playing for England since 2012.

Compton was born on June 26, 1983, in Durban, Natal Province, South Africa. His full name is Nicholas Richard Denis Compton. He belongs to South African nationality by birth and later changed his nationality to English. He is of mixed ethnicity.

Compton is the son of, Richard Compton who is a former first-cla s s cricketer and Zimbabwean mother, Glynis who had backgrounds in public relations and journalism.

Compton belongs to the family from the sports background. His father, Richard, and uncle, Patrick were professional cricket player and have played first-cla s s cricket for Natal in South Africa. His grandfather, Denis Compton was a test cricketer and Arsenal football player.

Compton attended Harrow School on a sports scholarship scheme. He was mentored by house master David Elleray during his school time. He then moved to England, where he attended the Durham University and graduated with a social science degree from the University.

Compton made his List-A debut for Middlesex in June 2001 after playing several matches during his high school. He played in the Norwich Union League at the end of the 2001 season batting at six and scoring 6 runs from 9 deliveries in a 40 run defeat by Glamorgan.

Compton debuted his U19 Test match against India in July 2002 but made a total of just six runs from his innings opening the batting. He has actively played with several teams such as Middlesex, Somerset, and Mashonaland Eagles.

Compton has toured in several countries like India, New Zealand, South Africa, and Sri Lanka. He has shown great performances in most of the international matches played by him.

Compton has reached the age of 33 now. He has been actively playing cricket for many years. He has earned popularity as a professional cricket player.

Talking about his personal life, he is not married yet. He was in a relationship with Kitty Spencer who is the eldest daughter of Earl Spencer and niece of Princess Diana.  The couple met in September 2013 and started dating.

Compton has posted several pictures with his girlfriend on social networking sites. However, they stayed in a relationship for over 1year and broke up in 2014.

Compton is currently single and has not involved in any relationship. He might be in a relationship but has not disclosed about his current relationship status to the public.

Compton stands an incredible height of 1.8 meters (6 feet 2 inches). He has earned a huge amount of salary from his playing career as per the earning of a professional player. He has maintained an impressive net worth over millions yet his net worth is not disclosed.