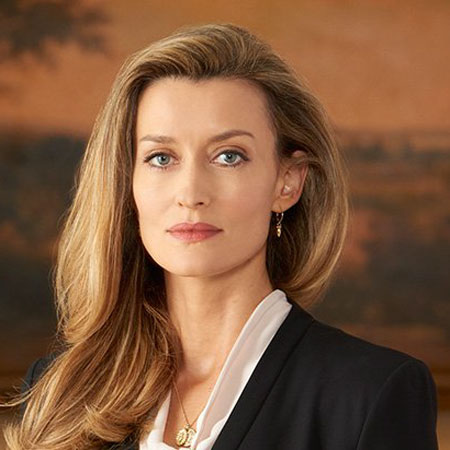 British Actress, Natasha Abigail Taylor, popular as Natascha McElhone is best known for her portrayals in  Ronin (1998), The Truman Show (1998) and Solaris (2002). She has played the role of Karen van der Beek in the Showtime comedy-drama, Californication. Her other notable works include First Lady Alex Kirkman in the ABC political drama Designated Survivor (2016–2017), and Laz Ingram in Beau Willimon's upcoming Hulu science-fiction series The First (2018).

Natascha McElhone is an English actress born on 14th December 1969 in Surrey, England. She is popular for her role in American movies like The Truman Show, Ronin, and Solaris. Her birth name is Natasha Abigail Taylor. Recently she had worked on Showtime series Californication as Karen van der Beek.

McElhone is the daughter of Noreen and Mike Taylor. Her parents were journalists. McElhone had taken the maiden name as her stage name which was her mother’s name. She has a brother named Damon who is a scriptwriter. Also, she has two half-brothers named Nicholas and Alexander living in Stockholm. UnfortunatelyMcElhone’s parents were separated when she was two years old.

After separating from her parents her mother along with she and her brothers moved to Brighton and married Roy Greenslade who is a columnist and also a journalist. From 6 years old to 12 years old she had taken a lesson in Irish Dancing. She had attended St. Mar’s Hall School in Brighton. And in 1993 she had graduated from London Academy of Music and Dramatic Art.

McElhone has done many films as well as television series. She had started her career in theater starring in Richard III, The Cherry Orchard and also Count of Monte Cristo at Haymarket Theatre and also in Midsummer Night’s Dream at Open Air Theatre. She had made her debut in television in 1991 in BBC’s Bergerac. In 1992 she had also seen in an episode of Absolutely Fabulous.

She had co-starred in NBC miniseries named Revelations in 2005 with an actor named Bill Pullman. After acting at Wyndham’s Theater of 2006 West End Production alongside Martin Jarvis and Diana Rigg she had accepted to act in the leading role as Karen alongside David Duchovny in Showtime cable TV series named Californication.

In 2010 she had given her voice in a video game called Castlevania: Lords of Shadow who is from Konami. In 2013 she had acted in Rome and Juliet as Juliet’s mother alongside Damian Lewis and Hailee Steinfeld. In 2014 she had played in Fatal Attraction in Theatre Royal Haymarket in the role of Alex Forrest.

Natascha McElhone’s estimated net worth is $5 million at present. She is a very beautiful girl with a sexy figure. Her figure has made her have so many fans worldwide. She, in short, can be termed as a beautiful diva with a sexy impression. She stands 5 feet 8 inches tall and 52 kg weight

On 19th May 1998, McElhone married to Dr. Martin Hirigoyen Kelly, a plastic surgeon. They lived in Fulham West London. The couple has three sons.

The couple welcomed their first son in 2000 named Theodore. Their second child was born on May 2003 named Otis and their third child named Rex was born on October 2008, five months after the death of his father Kelly. Her husband died suddenly. The post-mortem report said that death was due to dilated cardiomyopathy.

After that, the actress is leading a low profile life.