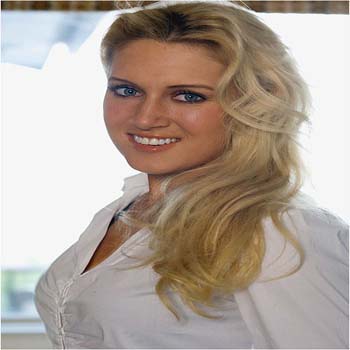 Natalie Gulbis is a professional golfer. She plays on the U.S. based LPGA Tour. She is considered to be a sex symbol in the LPGA. She has released a 2005 calendar, just before the 2004 U.S. Women's Open.

Natalie Anne Gulbis was born on January 7, 1983, in Sacramento, USA. She holds an American nationality belonging to the White-American ethnicity.

Gulbis started finding interest in the game at the early age of four. By the time she reached age seven, she had won her first tournament, and at age ten, she reports she was breaking par.

While she hasn't had the level of success that many predicted for her, Natalie Gulbis has been a solid performer over her LPGA career, and one of the tour's most popular players (among both fans and her fellow competitors).

Not to mention, one of the LPGA's sex symbols. There was a time when Gulbis' swimsuit calendars completely overshadowed her golf. Gulbis played collegiately at the University of Arizona in 2000 and 2001 (when one of her teammates was Lorena Ochoa), won the 2001 NCAA West Regional and was named an All-American in 2001.

After her soph 0re season, she turned pro. She earned her LPGA Tour card by finishing third in Q-School and 2002 was her rookie year on the LPGA. It was a solid season, too, with four Top 10s; Gulbis finished 39th on the money list and was runner-up for Rookie of the Year.

Gulbis' fame exploded in 2004, and not for her golf talents, but for her looks. She released a wall calendar in 2004 (for the calendar year 2005) that included multiple poses in swimsuits and bikinis. (She also posed in bikinis for "laddie" magazine FHM.) The USGA even banned the Gulbis calendar from merchandise tents at the 2004 U.S.

Gulbis produced a few more swimsuit calendars (see photos) in the ensuing years, and her sexy public persona continued to overshadow her golf - despite some good play. She was even followed by Golf Channel cameras for a 2-season run of The Natalie Gulbis Show.

Gulbis' most consistent season on the course was 2005 when she made 26 of 28 LPGA cuts, had 12 Top 10 finishes (a career high) and finished sixth on the money list (another career high), albeit without winning.

Gulbis set a tour record (since broken) for most money earned without a victory, and she finished in the Top 8 in three of the four majors. She came close to her first victory at the 2006 Jamie Farr Owens Corning Cla s sic but lost to Mi Hyun Kim in a playoff. The next time Gulbis got into a playoff, however, she got the job done, earning her first LPGA win at the 2007 Evian Masters by beating Jeong Jang in a playoff.

Natalie Gulbis' net worth is $4 million at present. She has earned a decent amount of salary from her successful playing career. She tapped in for a two-putt birdie on the first extra hole to claim the winner's prize of $450,000.

In 2005, Gulbis became the first golfer to earn more than $1 million in a single season on the LPGA Tour without winning during that season. She is 5 feet 9 inches tall and her weight is around 57 kg.

"The Natalie Gulbis Show", a four-part reality series airing exclusively on The Golf Channel. The series debuted on Tuesday, Nov. 15 at 10 p.m.

Gulbis is the only child born in her family. She is considered to be a sex symbol in the LPGA, she released a 2005 calendar, just before the 2004 U.S. Women's Open, which featured her not only playing golf but also in striking poses in swimwear. She is married but has no children yet.

At the end of 2013, she married Josh Rodarmel, a former Yale quarterback, and 1-handicap. The couple is enjoying their marital relationship and there is no sign of divorce between this couple.