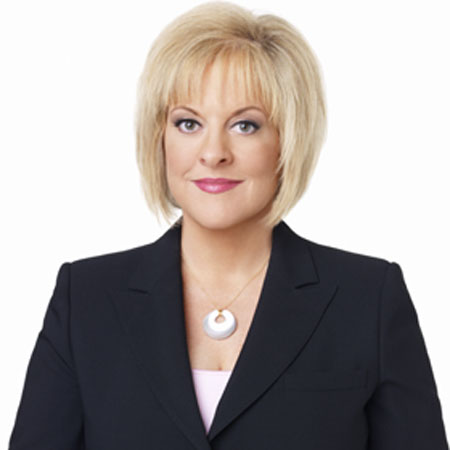 Nancy Ann Grace was born on 23rd October 1959 in Macon, Georgia in the United States. She is a television journalist, television host, a former prosecutor and also a legal commentator. Mostly she discusses the issues about victims’ rights in an outspoken style.

Elizabeth Grace, a factory worker, and Mac Grace are her parents. Nancy has two siblings and she is the youngest of all. She is a white American national.

Nancy Ann Grace completed graduation from the Macon’s Windsor Academy in the year 1997. Followed by her graduation she attended the Valdosta State University.

She completed BA from the Mercer University. When she was only 19 her fiancé got murdered which inspired her to enroll in a law school. She then decided to become a felony prosecutor and also a supporter of victim’s rights.

For nearly a decade as a Special Prosecutor Nancy Ann Grace worked for the Georgia District Attorney’s office and Atlanta-Fulton County.

By making some improper statements in a 1997 arson and murder case she had been rebuked by the Supreme Court of Georgia. Ann was approached by Court TV founder for doing legal commentary show next to the Johnnie Cochran.

In addition to her Court TV Show in the year 2005 Ann began hosting a primetime show titled Nancy Grace. The show was about legal analysis and it aired on CNN Headline News.

Nancy was a contestant on the Dancing with the star’s thirteen seasons along with Tristan MacManus which started airing on 19th September 2011. She did not win the show but she got in the 5th position.

Nancy Ann Grace has appeared in the season 8th finale episode on 22nd May 2007 opposite of the Star Jones. She has also worked in the film named ‘Hancock’ in a cameo. On 11th August 2009, Nancy has published her first novel entitled ‘The Eleventh Victim’.

Against her, a law professor at the George Washington University told David that Ann as a reporter as well as an attorney, ‘’has managed to demean both professions with her hype, raid persona, and sensational analysis. Some part of the public takes her seriously and her show erodes the respect for basic rights’’.

Nancy Ann Grace is married to David Linch who is an Atlanta investment banker. The couple tied the knot in 2007 April in as small and a private ceremony.

The couple first met in the 1970s while she was attending the Mercer University. The couple has twins together among them one is boy and another is a girl, respectively named John David Linch and Lucy Elizabeth Linch.

Before her marriage, she was engaged to her boyfriend Keith Griffin. He was murdered in 1979 by his former co-worker named Tommy McCoy. In an interview with Piers Morgan she said that she dropped 89 pounds because of the effect of her fiancée’s death.

She also said ‘’I went nearly 30 years without being able to really seriously entertain marriage or a family. In fact, the word marriage would actually give me a shake when it was brought up’’.

Nancy’s estimated net worth is $18 million.