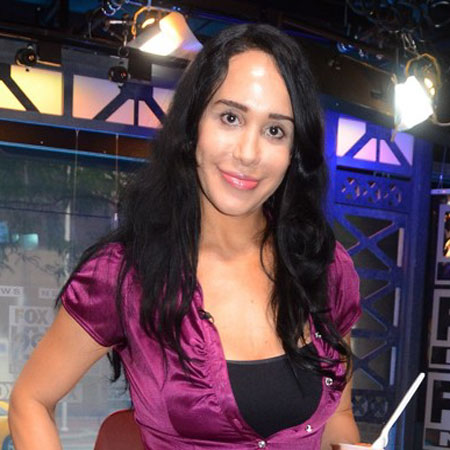 Nadya Suleman is an American media personality who came into the limelight after giving birth to 8 babies at once. She is also an adult film actress who has even won an award for her performance on-screen.

Nadya Denise Suleman was born on 11th July 1975 in Fullerton, California, USA. She is the daughter of father Edward Suleman and mother Angela Suleman. She is an American Citizen with Iraqi, Lithuanian Ethnicity.

She came to limelight with her decision of giving birth to octuplets. Her decision was severely criticized saying her decision would only burden taxpayers via public assistance.

Nadya began her IVF treatments in 1997 at the age of 21 years old. Dr. Michael Kamrava was her supervisor.  She gave birth to her first child in 2001. Her first child was a boy and she delivered a girl in 2002. And with further IVF treatments, she gained additional consecutive pregnancies and had a total of six children including a set of fraternal twins.

She let it out publicly in 2008 that she had six embryos left from her last IVF treatments and so she had the embryos transferred into her uterus at one time while the rule says two or three at the most. Defending her act she reasons that she did so to protect the frozen embryos.

Her supervisor Dr. Kamrava’s medical license was revoked on July 1, 2011, after it was found by California Medical Board investigation that he transferred twelve embryos which was considered to be an “extreme” departure from the set standard of care.

The news of the birth of the octuplets became a media sensation internationally. Public response was widely known to be negative including death threats. Though Suleman claims to be able to provide for her children, her records differ as she is unemployed and in debt.

She had to face the fear of getting custody at first but by April 14, 2009, all of her children were home. On January 26, 2010, the octuplets celebrated their first birthday. She has made many television appearances. In February 2009 she appeared in an interview with Ann Curry.

She stated in the interview that she would be able to provide for her children by herself. In March that year, she appeared in the show Dr. Phil along with guest Gloria Allred.

On July 24, 2009, Suleman signed an agreement with Los Angeles Superior Court to have each of her children paid $250 daily for starring in a reality show on Fox called “Octo-Mom: The Incredible Unseen Footage. In the February of 2010, she was featured in the magazine Star.

Her interview including pictorials concerning her weight loss after delivering octuplets was focused. In April 2010, she made an appearance on The Oprah Winfrey Show and Idol Gives Back. She claimed in the shows that she had never received any plastic surgeries.

She appeared semi-without clothes for the U.K magazine Closer in March 2012.

She was allegedly accused of neglecting her children but spending on herself. Anyhow, when social workers visited her house they confirmed that children were not in danger and they could remain with her.

As of February 2019, her net worth was reported to be around -$1 million according to cheatsheet. There is no information about her exact earnings however, the average adult film star earns around $47.50 per hour.

The film has no male actors and shows only Suleman in solo scenes with the help of an adult toy. The state of California accused her of welfare fraud on January 13, 2014, as she failed to disclose nearly $30,000 in earnings.

Suleman married Marco Gutierrez in 1996. The couple separated in 2000 and Marco filed for divorce in November 2006. The divorce was finalized in January 2008.

Her husband said the reason for their divorce was not being able to have children despite various attempts. Suleman wanted to try IVF treatments while her husband didn’t like the idea of “test tube babies”.