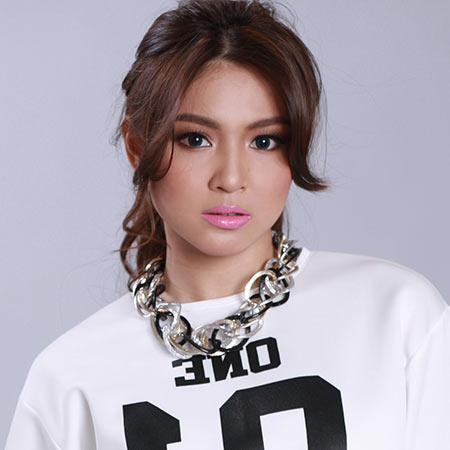 Nadine Lustre is a Filipina actress and singer. She is notable for her role in ‘Dairy ng Pangel’ and also as Georgina Evangelista in the television remake of the ‘Bagets’ Film series. Similarly, she was also a member and vocalist of the all-female group Pop Girls.

Nadine Lustre was born on 31 October 1993 in Quezon City, Philippines. She is the eldest of four children of Ulysess Lustre and Myraquel Paguia-Lustre. Nadine follows Filipino religion. She has three siblings Isaiah Lustre, Ezequiel Lustre, and Naomi Lustre.

Nadine Lustre went to Diliman Preparatory School and is currently taking Communications Arts at Colegio de San Lorenzo in Quezon City. She started her career at the age of nine as a TV host in RPN’s children oriented show named ‘Storyland’.

After singing with Viva Entertainment, Nadine Lustre became one of the members of the cast in TV5’s youth-oriented program named ‘Bagets’.

Nadine Lustre was one of the original members of the group ‘Pop Girls’ which was launched by Viva Entertainment 2009. She was the only pure pinay in ‘Pop Girl’s original group. However, she left the group to begin her own solo music career. In 2014, Nadine released her debut album under Viva Entertainment. The album had hit songs such as ‘No Erase’, Paligoy-Ligoy’, Bahala Na and so on. She was given Titanium Award by SBS PopAsia, which is a popular Australian music show for her song ‘Me and You’ from her self-titled album.

Nadine Lustre played the role of Reah Eya Rodriduez in ‘dairy ng Panget’, which is a Viva Films produced a movie of the best-selling novel of the same name by ‘Have You Seen This Girl’. After the success of ‘Diary ng Panet’, she was again cast in another film adaptation named ‘Talk Back and You’ve Dead’.

Some of her other television shows and movies include ‘Till I Met You’, ‘WaPak-Winner and Pakwela at Kulitan’ , ‘Chain Mail’, ‘Beauty and the Bestie’, ‘This Time’ and so on.

Nadine Lustre is currently in a relationship with popular actor James Reid. The couple first worked together when Nadine became Reid’s leading lady in the latter’s music video for his single, ‘Alam Niya Ba’. Later on, Lustre made up one-half of the popular Filipino loveteam called ‘JaDine’ alongside James Reid and perhaps after that they fell in love.

The lovely duo admitted being in a relationship in February 2016. James confirmed their relationship at their sold-out ‘JaDine In Love’ concert.

Nadine Lustre's height if 5 feet 5 inches and her weight is approximately 53kg. She has not yet talked about her net worth and earnings to the media.