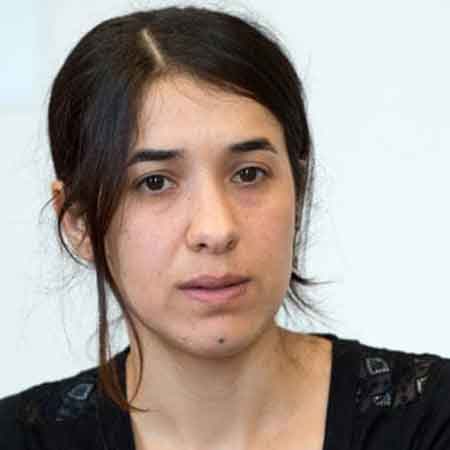 Nadia Murad was involved in human rights activism following a tragic incident. When she was 19, Islamic State fighters rounded up the Yazidi community and killed 600 people including her six brothers and step-brothers. Following the inhuman incident at the Second Iraqui Civil War, in September 2014, Murad including 6,700 Yazidi women were imprisoned by the Islamic state.

Murad and other imprisoned women were held as a slave in the Mosul city. She went through terrible torture in the imprisonment, she was beaten, burned with the cigarettes and was raped when she tried to escape from the torment. She eventually became able to escape when her captor left the house unlocked. Nadia was kept by the neighbor family and subsequently, she made it to the refugee camp in Duhok, northern Iraq.

After escaping from the Islamic State fighters, Nadia gave her first testimony to the Belgian daily newspaper La Libre Belgique in February 2015. At the particular time, she was staying at the Rwanga camp and later she took the benefit of the refugee programme of the Government of Baden-Wurttemberg, Germany.

In September 2016, she came forward as a client to take legal action against ISIL commanders. Attorney Amal Clooney spoke to the United Nation Office on Drugs and Crime and characterized the rape, genocide, and trafficking by ISIL as a bureaucracy of evil on an industrial scale. For her brave action, Murad was frequently threatened to back off.

Not afraid of threats and danger, Murad rather went on working even more actively. In September 2016, the activist announced her own organization named Nadia's Initiatives. The good news was announced by the journalist Tina Brown at an event in New York. The same month, Murad was named the first Goodwill Amba s sador for the Dignity of Survivors of Human trafficking of the United Nations.

Similarly, the activist was awarded the Council of Europe Vaclav Havel Award for Human Rights in 2016 for her contribution to the humanitarian work regarding human trafficking. The same year, she was honored with the Sakharov Prize for Freedom of Thought. She shared the award alongside another Yazidi human rights activist Lamiya Aji Bashar.

In the year 2017, she published the memoir titled The Last Girl: My Story of Captivity, and My Fight Against the Islamic State. In the memoir, she describes her terrible experience when she was captured by the Islamic State during the Second Iraqui Civil War. The book gained a huge attention of people all over the world.

For her efforts and contributions to ending the use of sexual violence as a weapon of war and armed conflict, the activist Nadia Murad was awarded the Nobel Peace Prize for 2018 by The Norwegian Nobel Committee. She was honored by the prestigious award alongside the Congolese gynecologist Denis Mukwege.

Both of them have fought greatly against the wartime sexual abuse. Physician Mukwege is helping the victims of sexual violence for a long time now. Aside from the Nobel Peace Prize, he was honored by several awards including; The Legion of Honour.

Murad was a strong contender of the Nobel Peace Prize after her active participation against the violation of Islamic State fighters. Thus the result came as no surprise to the fans.

Activist Nadia Murad is actively involved in several humanitarian works. She is more into helping people rather than acc u mulating an attractive amount of net worth. There is no reliable information regarding her exact figure of net worth. So far she is leading a simple and normal life helping others the best she can.

The Nobel Peace Prize winner activist Murad was awarded a whopping winning amount of $1 million with a medal. The medal is worth $4.76 million.

Yesterday was a special day for @AbidShamdeen & I. We are very thankful and humbled for all the wishes & support from our family & friends. The struggle of our people brought us together & we will continue this path together. Thank you for your support everyone! pic.twitter.com/MpeEOGguGK

Both Murad and Shamdeen comes from the Shingal region. Though Murad resides in Germany, she frequently visits Shingal advocating for Yezidis and Shingal to help the survivors of human trafficking.