Moya Brady is an English actress best known for portraying the role of Urgl in the film The NeverEnding Story III. Likewise, her other notable work credits include Pride & Prejudice, Scoop, and The Imaginarium of Doctor Parna s sus.

Moya Brady was born on September 8, 1962, in Manchester, Lancashire, England. She was raised in the seaside town of Blackpool, Lancashire.

As of 2021, she is 58 years old and her height is 4 feet 11-inch or 151 cm tall. She holds an English nationality while she belongs to the white ethnicity.

Who Is Moya Brady Married To?

Brady is married to John A Shaw. In 1982, the couple exchanged wedding vows in a close ceremony. Together, the duo shares two children, however, their names are yet no revealed.

The 58-year-old prefers living a low-key life. So far, no reports regarding her personal details including parents, siblings, childhood, and education are available.

Moya has been contributing to the Hollywood movie industry since 1986. Along with films and series, she has also acted in a wide variety of roles in theatre as well.

The Manchester-based actress made her debut playing Clare in an episode of the television series Screenplay in 1987. The same year, she acted in Little Dorrit and Visiting Mr. Beak.

Eventually, Brady came to the spotlight for playing the role of The NeverEnding Story III (1994) alongside Melody Kay, Jason James Richter, Jack Black, and Julie Cox. 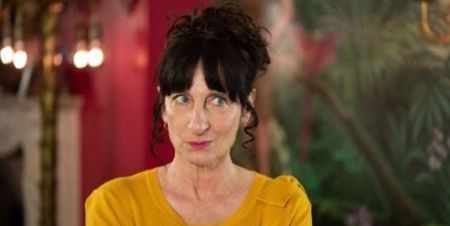 Her other notable acting credits include Life Is Sweet, The Bill, The Emperor's New Clothes, Shameless, Pride & Prejudice, Doctor Who, The Chase, The Imaginarium of Doctor Parna s sus, Josh, and Hollyoaks Later, and Its A Sin.

Hollyoaks actress Moya Brady is worth $2 million as of May 2021. Professional since 1986, she has altogether 64 acting credits under her name.