The American TV personality, host as well as a Moniece Slaughter is best known for appearing in the reality show, Love & Hip Hop: Hollywood. She is also a renowned social media star who has already gained millions of followers on Instagram.

Moniece Slaughter was born under the birth sign, Pisces on March 4, 1987, in Los Angeles, California. She is also known with the nickname Moniece, Kali. Her mother's name is Marla Thomas while her father is unknown. Her stepfather is Dave Thomas.

Moniece Slaughter made her on-screen debut with her appearance in the first season of show Love & Hip Hop: Hollywood. In the second season, she was cast as a lead character. However, in the third season, she stepped out from the show.

Later on, she started working with Akon and Marques Houston as a songwriter as well as a singer. She sang the theme song of the popular American TV show, America’s Next Top Model. Moniece has also made her appearance on the show, On The Set W Jasper Cole.

Moniece Slaughter's Net Worth and Salary

The reality star, Moniece Slaughter has a net worth estimated around $1.7 million, which she has collected from her acting as well as modeling profession. For her appearance in the  Love and Hip-Hop, she might have received around $20 thousand per episode like other cast members.

She also makes a good income from the endorsements deals on Instagram, where she has over 1.4 million followers. As per the sources, she makes around $2800 to $4700 per ads post.

The 32 years old television personality, Moniece Slaughter came out as a bisexual. Currently, she is living a single life. But, she was in a relationship with A.D. Diggs previously. Before this, she dated a number of persons. 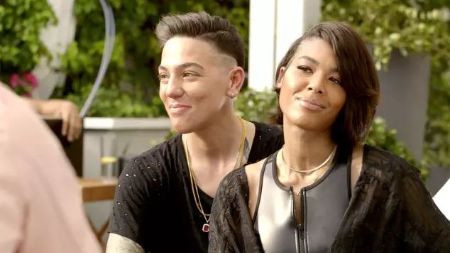 Her first relationship was with her high school sweetheart, Eric Darnell who is also known as  Lil Eazy-E (son of rapper Eric Lynn Wright). They dated for around two years, from 2005 to 2007.

Following her break-up with Darnell, she started dating American rapper William Ray Norwood a.k.a Ray J in 2007 but broke up after a year. The same year, she was also rumored to be in relationship with rapper Leon’Roccstar’ Youngblood Jr.

She also started a relationship with American rapper Dreux Pierre Frederic a.k.a Lil Fizz with whom she shared a son, Kameron David Frederic born on January 8, 2010. The pair broke up in 2012.

From 2012 to 2013 she dated Michael Joseph Taylor. Apart from all of this relationship, she also had an encounter with Joe Smith, Rich Dollaz, Money S.L, Durrel Babbs.