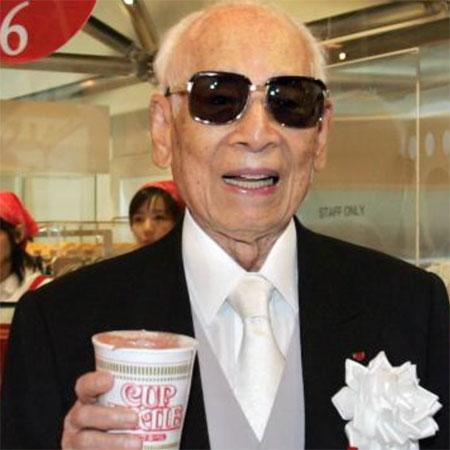 Momofuku Ando was the founder of the Japanese food product company, ‘Nissin Food Products Co. Ltd.’ He invented the concept of cup noodles, instant ramen and instant noodles which became famous as the cheapest & most convenient food.

Ando was known as a great inventor by the Japanese for bringing food to the hungry people of Japan at the time when there was devastation all around the country.

Momofuku Ando was born on 5th of March, 1910 in the Taiwanese city of Kagi-cho (presently known as Chiayi). His parents raised him and gave him a birth name, Go Pek-Hok.

In 1933, Ando went to Osaka, Japan, to study economics at the Ritsumeikan University. During the time, he started a clothing company.

Taking inspiration from his grandparents, who were the owners of a small business store, textiles store, at the age of twenty-two, Ando started his own textile business & traveled to Osaka, Japan. Shortly after that, Ando became a Japanese citizen and entered Ritsumeikan University in Kyoto.

After much experimentation, Ando developed a flash-frying method and sold the first packet of instant noodles on 25th August of 1958 when he was forty-eight years old.

After the Second World War, he became a Japanese citizen. He changes his original Chinese name Go Pek-Hok to the Japanese name of Momofuku and added the Japanese surname, Ando.

Ando lost his clothing company due to bankruptcy and began a small family-owned salt producing company in Ikeda, Osaka. This company was the forerunner of the present day company.

On 18th September 1971, Ando came out with the first cup noodle product packed in a waterproof container made from polystyrene. It was an instant hit & this masterstroke converted his company into the booming business overnight.

In 1992, Ando received ‘Distinguished Service Award’ for his contribution in the field of Science and Technology in Japan. He was also awarded the ‘Order of the Rising Sun, Second Class, with Gold & Silver stars’ by the Japanese government in 2002.

In the year 2005, the astronauts in the space shuttle ‘Discovery’ had instant noodles from the special containers made by him.

In 2007, chicken ramen was being sold at 60 Yen a packet in Japan which was almost one-third of the cost of a serving of cheap noodles in any Japanese restaurant.

Famous Japanese entrepreneur Ando was one of the inventors of instant noodles. Before he died at the age of 96 in 2007, he amassed an amazing wealth. His total net worth peaked at approximately $100 million.

His company, Nissin Food Products Co. Ltd, generated revenue of $3.3 billion whereas the company's net income as of March 2011 was estimated to be $183 million. The company had employed 7505 people in 2011.

Ando received several honors during his life in both, Japan & USA. He was an extraordinary man.

Momofuku Ando has two sons and a daughter with his wife, Masako. There is no any other information about his wife and children.

Ando was honored by the Japanese government with various medals including Gold and Silver Star, Second Class, The Order of the Rising Sun in 2002.

On 5th January 2007, Ando died of heart failure at the age of 96 in Ikeda, Osaka leaving behind wife Masako, a daughter, and two sons.

Ando claimed that the secret of his long life was playing golf & eating Chicken ramen almost every day. He was also said to have eaten instant ramen until the day he died.