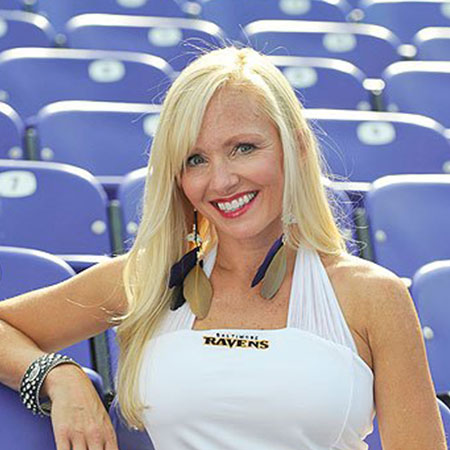 Molly Shattuck is an American socialite who came to national fame after becoming the oldest cheerleader on record for the NFL when she started cheering for the Baltimore Ravens Cheerleaders. She is one of the ex-wives of Mayo A. Shattuck III.

Molly Shattuck was born as Molly A. George on February 19, 1967, in Kittanning, Pennsylvania, the United States of America.

Names of her parents are not available. It's also unknown if she has a sibling or not. Her nationality is American and she belongs to white ethnicity.

She had studied at Ford City High School in Ford City, Pennsylvania from where she graduated in 1985. Before being graduated, she was voted Homecoming Queen.

She later attended the Indiana University of Pennsylvania, from where she completed her graduation with a marketing degree.

Molly Shattuck wanted to be a cheerleader since her high school. She said in an interview with Sports Illustrated that "being an NFL cheerleader" onto her bucket list.

She tried out for the Baltimore Ravens Cheerleaders in 2005 and she eventually became the oldest cheerleader in NFL history.

She was 38 years old when she became a cheerleader. She was an average of 15 years older than her other teammates. She was also the only mother on the squad.

Talking about the personal life of Molly Shattuck, she is single right now. However, the socialite was previously married to the businessman and philanthropist, Mayo A. Shattuck.

The former couple tied the knot in 1997 but after enjoying a romantic marital relationship for 17 years, they got a divorce in 2014.

Mayo was previously also married to Jennifer W. Budge (1976-1995) with who he shares two children; a son Mayo Shattuck IV and a daughter Kathleen Shattuck.

Molly Shattuck had developed a relationship with her son Spencer's friend and classmate in 2014. The two exchanged sexual text messages and explicit photos, and later Molly performed oral sex on the boy.

When the school principal received information about the alleged inappropriate behavior, he reported it to authorities after which she was arrested and charged with sexual misconduct.

She was released on the bail of $84,000 at the Sussex County Superior Court in Georgetown.

She was pleaded guilty by Judge E. Scott Bradley and was sentenced to 48 weekends in prison. She was registered as a sex offender and underwent sexual disorder counseling, and had to pay $10,650 in restitution to the family of the victim.

Both the salary and net worth of Molly Shattuck have not been disclosed yet. However, according to money.com, a cheerleader in the United States earns $10 per hour.

Meanwhile, the total net worth of her husband, Mayo A. Shattuck III, is $14 million, with an annual salary of $759,806, according to justrichest.com.

He owns an expensive $2.5 million worth house.