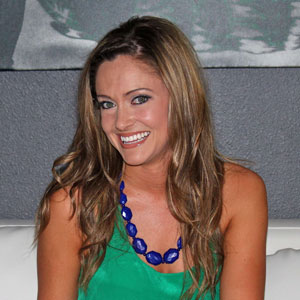 Molly Mesnick is a runner-up and eventual winner of The Bachelor’s 13th season. She appeared along with Melissa Rycroft, Jillian Harris, and Stephanie Hogan in the show which was premiered on January 5, 2009.

Besides Mesnick is a co-host of the Bender & Molly in The Morning show on 106.1 KISS FM Seattle. As a teenager, she was highly interested in sports.

Mesnick has been married to a former runner-up of The Bachelorette’s season 4 Jason Mesnick since 2010. The couple is also blessed with a daughter.

Born on March 10, in 1984, in Michigan, United States of America, Molly Mesnick is the daughter of Maryann Malaney and Mike Malaney. She is American as per nationality and belongs to White American ethnicity. She grew up in Michigan along with her parents. As a high school student, she was heavily involved in sports as she played varsity basketball and was a golfer.

Mesnick went on to study at the Indiana University and graduated with a bachelor’s degree in Communicate & Culture. She is currently working as a co-host of the Bender & Molly in The Morning show on 106.1 KISS FM Seattle.

Mesnick is also a runner-up and final winner of the show The Bachelor's season 13th, aired on January 5, 2009. She competed in the show along with winner Melissa Rycroft, Jillian Harris, and Stephanie Hogan.

According to some online source, the Bachelor and Bachelorette stars typically make around $100,000. Thus it can be assumed that the former The Bachelor's 13th season winner Molly also made the above amount of money.

Nonetheless, Molly’s net worth is yet to be revealed but her husband Jason has an estimated net worth of around $1 million, according to Celebrity Net Worth.

Molly Mesnick is married to the American reality star Jason Mesnick for over eight-year. She first met her husband Jason during The Bachelor’s 13th season, at the beginning of 2009. In the show, she first became the runner-up while Melissa Rycroft won the show as Jason originally proposed to American dancer and reality TV personality Melissa Rycroft, in the show.

But later, Jason changed his mind as he disclosed that he was still in love with the runner-up Molly Malaney. After that, he begged for Molly to give him another opportunity, in that televised moment. Jason became one of the most hated men in the franchise, after this unexpected moment on the show.

The pair got married on February 27, 2010, after a year of dating. They exchanged their vows in a televised ceremony on ABC’s show The Bachelor: Jason and Molly’s Wedding. The couple welcomed their first child, a daughter named Riley Anne Mesnick, on March 14, 2013. Despite the couple’s rocky beginning, they are still going strong.

Jason was previously married to Hilary Buckholz in 2003. The former couple has a son, Ty who was born in 2005. However, the two couldn’t last long and divorced in 2007.