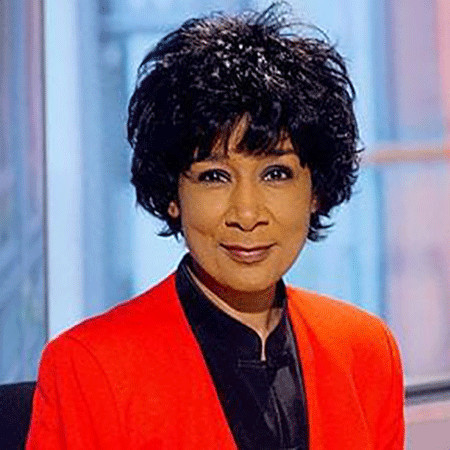 One of UK’s most recognizable television faces, Moira Stuart is a British news presenter who has become the first African-Caribbean female to appear on British television as a newsreader. Currently, she is serving in The Chris Evans Breakfast Show on BBC Radio 2 as the newsreader. She has spent more than three decades in the BBC Network.

Born to African-Caribbean Parents on September 2, 1949, in London, United Kingdom, Moira Start is a British citizen. She was raised in London and therefore, she got her education in London until she got 13. She went to Our Lady’s Convent RC High School in Stamford. Then her family moved to Bermuda for a while. At the age of 15, Moira and her family came back to London and she completed her study therein.

Moira Stuart has more than two decades of career in radio and television. She started her career in BBC in the 1970s as a production assistant in Radio Talks and Documentaries department. She served as a continual announcer and newsreader for BBC Radio 4 and BBC Radio 2. Later in 1981, Moira became the first female Africa-Caribbean newsreader to present the BBC News Bulletin.

With BBC Radio and Television network, Moira Stuart has presented several programs including Have I Got News For You!, The Holiday Program, Who Do You Think You are? and many others. Moira is much loved and admired in the BBC station. She has served in BBC for more than 3 decades. She has been a role model to many new presenters in the network.

Moira Stuart is a famous name in media journalism. No wonder, she is paid a huge sum as a salary. Once the rumor of Moira Stuart receiving 1700 pounds per show on Chris Evan’s Radio 2 programmed fueled the BBC row. The actual net worth of Moira is not available in any media by any means but can be assumed to be in a million pounds.

Moira Stuart is the daughter of Marjorie Gordon and Harold Stuart. Her mother was from Dominica and her father was a Barbadian Lawyer. Her parents got divorced when she was 10 months old. Her uncle Ken Gordon was a singer in the trio of Three Just Men. Her cousin Margaret Busby is the Ghana-born publisher.  Moira is a British Citizen and she considers herself a true mongrel while talking about her ancestry.

Moving onto her personal life, Moira Stuart has never been married. She states that at two occasions, she almost got married. Des Lynam confessed that the two dated in the past. He wanted to be her husband but things did not work well and they broke up. There is no more information available on her personal life besides this.

Moira Stuart became media personalities of 2002 at the EMMA Awards in 2002, 100 great black Britons in 2003, Oldie Autocutie of the year in 2008. She has received three honorary doctorate degree from University of Edinburgh, De Montfort University and Canterbury Christ Church University in 2006, 2012 and 2013 respectively.