Sir Mohamed Muktar Jama Farah, who is famous as Mo Farah, is a British long-distance runner. In modern Olympic Games history, he considered the most successful British track athlete who has been able to win Olympic gold medalist in both the 5000 m and 10,000 m. Mosty recently he has officiated that he would participate in the twentieth series of I'm a Celebrity...Get Me Out of Here.

Mo Farah was born as Sir Mohamed Muktar Jama Farah on March 23, 1983, in Mogadishu, Somalia to a family from Gabiley, Somaliland. As per the sources, his father was a businessman. He also has a  twin brother, Ha s san Farah.

He spent most of his childhood days as a refugee in Djibouti after fleeing from Mogadishu to Gabiley with his family. Later on, he to Britain to join his father, Mukhtar Farah.

Talking about education, he went to  Isleworth and Syon School, and Feltham Community College. Later on, he joined the Borough of Hounslow Athletics Club in west London. Also from 2001 to 2011 trained at St Mary's University College, Twickenham.

The 37 years old, Mo Farah is a married man. He has shared the wedding vows with his long-time girlfriend Tania Nell in April 2010, in Richmond, London. 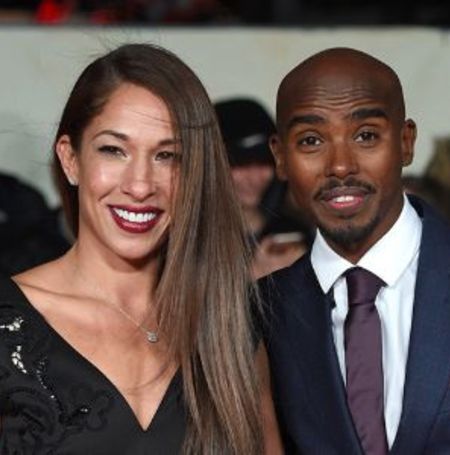 While talking about their love story, they met each other while both of them were at a west London university. Together they have shared three kids: twin daughters Aisha Farah and Amani Farah, born in August 2012, and a son Hussein Farah, born in 2015.

Also, he is a stepfather to Rhianna, from his wife Tania's previous relationship.

Mo Farah has a net worth of $5 million as of 2020 from his career as a British long-distance runner and the most successful British track athlete in modern Olympic Games history.

His main source of income is from his Olympic career and lucrative endorsement deals with several brands and companies such as Quorn, Bupa, PACE Sports Management, Nike, Lucozade, and Virgin Media.

In the Olympics, he has earned four Olympic gold medals. Also, he is the second athlete in modern Olympic Games history to win both the 5,000 m and 10,000 m titles at successive Olympics.