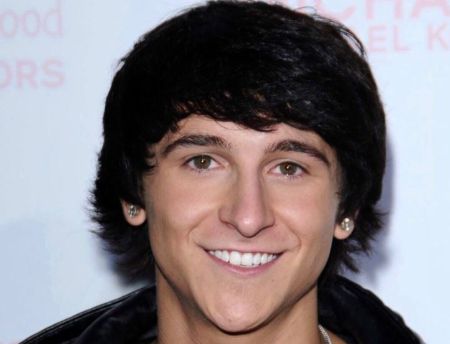 Mitchel Musso is an established American actor, singer, and songwriter. He got huge public attention for his role Oliver Oken on Disney's teen sitcom Hannah Montana. Similarly, he is also known for his performance in Pair of Kings, Monster House, and Life Is Ruff.

Mitchel Musso's full name is Mitchel Tate Musso. He was born on July 9, 1991, in Garland, Texas, the United States, under the zodiac sign Cancer. Currently, he is 30 years old and he stands at the height of 5 feet 9-inch or 175 cm.

His mother is Katherine (née Moore) and the father is Samuel Musso. Both of his parents were engaged in community theater in Dallas, Texas. By nationality, he is an American and he belongs to Albanian descent.

Mitchel grew up in Rockwall, Texas along with his two brothers. One of his siblings, Mason Musso, is a singer who is a lead vocalist in Metro Station band, while, the other named Marc Musso is an actor.

Career Highlight: What Is He Known For?

Musso has been active in the entertainment industry since 2002. In his initial years, he appeared in The Keyman, Am I Cursed?, Oliver Beene, Avatar: The Last Airbender, Stacked, and Life Is Ruff. In the year 2006, he rose to prominence for providing his voice in the movie Monster House.

Additionally, the 30 year old acted in King of the Hill, Schoolhouse Rock!, The Search for Santa Paws, Pair of Kings, She Will Be Free, and Sins of Our Mouth. Finally, he got international fames from the show Hannah Montana (2006-2011). On Disney's teen  sitcom, he portrayed the role of Oliver Oken / Mike Stanley alongside Miley Cyrus, Emily Osment, and Jason Earled.

His notable work credits includes Secondhand Lions, Hatching Pete, Hannah Montana: The Movie, Phineas and Ferb: Across the 2nd Dimension,  The Sand, Characterz, Squirrel Boy, Yin Yang Yo!, PrankStars, and Milo Murphy's Law, Save the Island, and The Rise.

Besides acting, Mitchel is also a singer and songwriter. His first and only studious album titled Mitchel Musso (US 100,000+ sales) was released on June 2, 2009. The track includes singles like The In Crowd, Hey, and Shout It. Likewsie, he is also recognized for singing songs such as Get Away, Celebrate, Replaceable, If I Didn't Have You, and Top of the World (featuring Doc Shaw).

Pair of Kings' actor is yet to reveal exact figure of his wealth. According to The Richest, Mitchel Musso's net worth of $4 million. On the other hand, he owns $3 million fortune as per Celebrity Net Worth.

The primary source of his income is his movies, television series, songs, and albums. The average salary of actor is $43,760 per year in United States. Likewise, singers are generally paid between $41399 to $56519 annually.

Mitchel also receives an impressive sum through his photoshoots, commercials ads, sponsorship, and endorsement deals. According to Influencer Marketing Hub, his Instagram makes $776.25 to $1,293.75 per permotional post with an engagement rate of 25.93%.

Talking about Musso's personal life, his relationship status is not clear. At the moment, no reports regarding his girlfriend, partner, or wife is available.

In the past, Mitchel had numerous affairs. As per reports, he was dating his Hannah Montana co-actress Emily Osment for almost two years.

Additionally, he was romantic relationship with Gia Mantegna and Haley Rome. As per rumors, his name was also linked with Katelyn Tarver and Cody Kennedy.

The singer was arrested for driving under the influence of alcohol in 2011. The police left after he paying a fine of $5,000. Though the incident did not seem big deal at first, the matter  became the cause of the show 'PrankStars' cancellation. Also, his role was written off in series Pair of Kings.