Mikkel Hansen is a rising Danish handball player who plays for the Danish national team and Paris Saint-Germain. The player started his professional playing career in 1997 and has played for teams like GOG Gudme, FC Barcelona, AG Kobenhavn, Paris Saint-Germain, and Aalborg Handbold. He, however, is also famous for being the son of Flemming Hansen.

Who Is His Father? Age And Short Biography

Mikkel was born on 22nd October 1987 and is 33 years old, as of early 2021. He was born in Helsingor, Denmark, and belongs to Danish nationality.

Mikkel is the son of Flemming Hansen, who had also played for the Danish national handball team. He has played 120 national team matches and has scored 240 goals. His father has also participated in the 1984 Summer Olympics.

The 33 years old handball player started his youth career in 1997, playing for Helsingor IF. He then joined Virum-Sorgenfri HK in 2000 and played for five years.

His senior career started in 2005 after joining GOG Gudme. He left the club in 2008 to join FC Barcelona. He played for FC Barcelona for only two years. In 2010, he joined AG Kobenhavn.

Mikkel currently plays for Paris Saint-Germain but will leave the club in 2022. He is signed for Aalborg Handbold.

How Much Is Mikkel Hansen’s Net Worth?

Mikkel has been active in the playing career for over two decades and has played for famous clubs. Likewise, he has also won hefty cash prizes and awards.

Do you know Mikkel is the highest paid handball player of 2020 in the world? According to Sportekz, He earns a basic salary of €2.5 million, whereas his monthly wage is €120,000. His earnings increased from €80 thousand to €120 thousand per month after his contract was extended.

Who Is His Partner? Is He Married?

Mikkel is not married but is currently dating girlfriend, Stephanie Gundelach. It is not clear how and when the couple started dating, but they seem happy together. 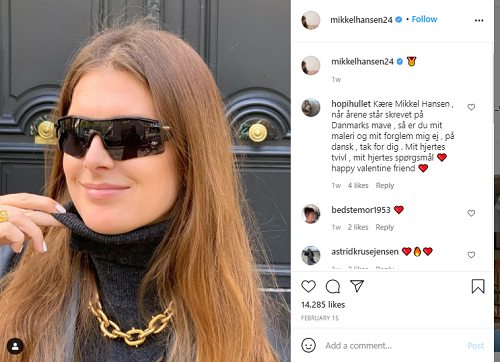 Pictures shared on their respective Instagram are what makes it clear that Mikkel and Stephanie are happy together. Together, the pair has welcomed a child. Her partner gave birth to their first child in January 2019.

Mikkel is 6 feet 5 inches tall and has an athletic body build.