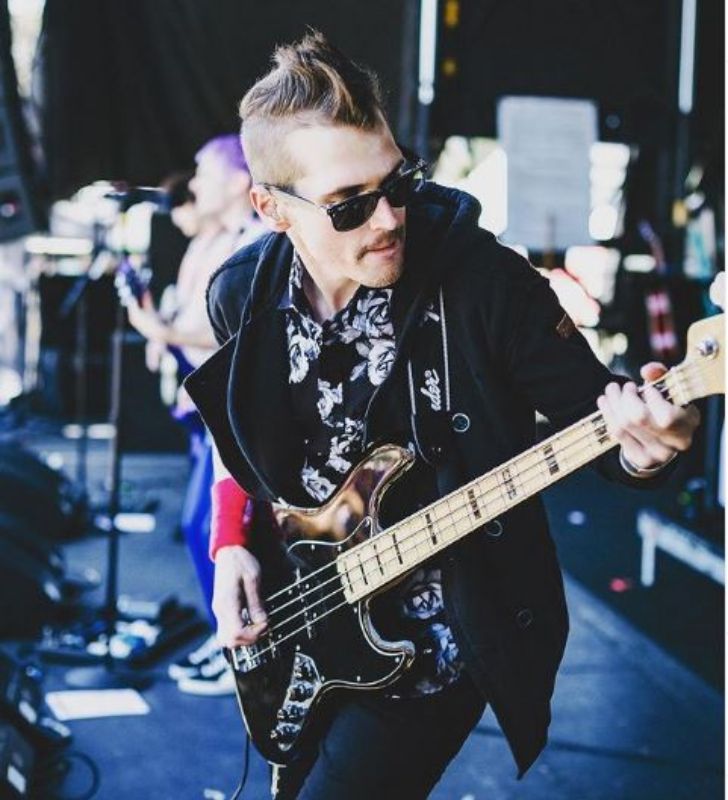 Mikey Way, an American musician as well as occasional actor is widely famous as the ba s sist of the alternative rock band My Chemical Romance. In addition to that, he works as a multi-instrumentalist in the rock duo Electric Century.

Way is also the co-founder of the band My Chemical Romance; it formed in 2001 and split in 2013 before the reunion in 2019. The group is mostly known for the songs "Welcome to the Black Parade" and "I'm Not Okay." Along with musical career success, Mikey enjoys the fatherhood of two children with his wife Kristin Colby.

When Is Mikey Way's Birthday? Age and Height?

Mikey was born Michael James Way on September 10, 1980, in Newark, New Jersey, the United States. An American by nationality, the musician comes from a mixed ethnicity- Scottish and Italian. The youngest of 2 sons to Donna Lee Way (née Rush) and Donald Way, Michael grew up alongside his older brother Gerard Way in Belleville, New Jersey.

CAPTION: Mikey and his brother Gerard; they are co-founders of the band My Chemical Romance SOURCE: [email protected]

Growing up, Way worked for Eyeball Records as well as Barnes & Noble.

Did you know? Mikey Way is a cousin of American podcaster and UFC color commentator Joe Rogan. Way's brother Gerard revealed the news via Reddit in 2015, which later Rogan confirmed, though none of them had met each other earlier.

In 2001, with his brother Gerard & friends Mikey, Ray Toro, and Matt Pelissier, Mikey formed a rock band My Chemical Romance, where he served as ba s sist and in back vocals. On a deal signed with Eyeball Records, the band released their debut album I Brought You My Bullets, You Brought Me Your Love in 2002.

They signed with the record label Reprise in 2003 and released their further 3 albums: Three Cheers for Sweet Revenge (2004), The Black Parade (2006), and Danger Days: The True Lives of the Fabulous Killjoys (2010). Some of their famous songs were I'm Not Okay (I Promise), Helena, Welcome to the Black Parade, Teenagers, and Sing.

However, on March 22, 2013, the band My Chemical Romance announced their split. It was until 6 years later, they again reunited and revived the band.

Married For Two Times- Who Is Mikey Way's Wife? Children?

The My Chemical Romance member, who married twice, enjoys a sound married life with his girlfriend-turned-second wife Kristin Colby, a social media star. She has more than 110K followers on her Instagram (@kristincolby) as of 2021 and is co-founder of Stay Connected Book Club.

According to Rock Sound, they actually married between February and March of 2016 but came up with a traditional wedding in April 2016. They began dating in 2014 and got engaged on March 27, 2015; Mikey proposed to Kristin while at Disneyland.

Together, the pair shares 2 children, both of them are daughters. They welcomed their first child, daughter Rowan Louise Way in May 2017. Then in December 2018, they announced the pregnancy with a second child. Following 6 months, they became parents to daughter Kennedy James Way in June 2019.

Past Marriage and Relationship

Prior to Kristin,  he was in a marital relationship with his then-wife Alicia Simmons, a ba s sist, and fellow touring member. They began dating in 2004 and later wed on March 8, 2007, backstage at the Orleans Arena in Las Vegas. However, only after 5 years of marriage, the duo divorced in 2012, with cheating allegations that Mikey denied later.

After their divorce, he was in a relationship with a model named Sarah Cantergiani; they were even addressed as fiances in 2013. But following a year of dating, they broke up. And later, Way met Kristin and the rest is history!

As a successful American musician and co-founder of the rock band, My Chemical Romance, Mikey Way has earned a tremendous amount of money from his productive career. Aside from album sales, the earnings from merch sales also aid his income.

According to online sources, Mikey's exact net worth is yet to be out but is estimated to be millions of dollars. The Celebrity Net Worth reports that this brother Gerard is worth $20 million. Since both of them have a notable journey in the music career, Mikey Way's fortune could be in the neighborhood as of his brother.