Michael Louis Chernus aka Michael Chernus is an American actor who is very famous for his appearance in the Netflix series, Orange Is the New Black as Cal Chapman. Also, he was part of the Marvel Cinematic Universe film Spider-Man: Homecoming as Phineas Mason / Tinkerer.

Michael Louis Chernus was born on August 8, 1977, in Rocky River, Ohio, the U.S. under the birth sign Leo. He is the son of Richard Louis Chernus and Barbara Jo. He is of American nationality and belongs to mixed ethnicity as his father is half-Hungarian and half-German.

During his high school days, she was active in the school basketball team and never thought of being an actor. He changed his mind to be an actor after he watched Sylvester Stallone's movie named Rocky.

While talking about education, he joined Rocky River Middle School and later on moved to Juilliard acting school.

Who Is Michael Chernus Married To?

The 43 years old, Michael Chernus is a married man. He has shared the wedding vows with Emily Simoness, on September 26, 2015, in New York. 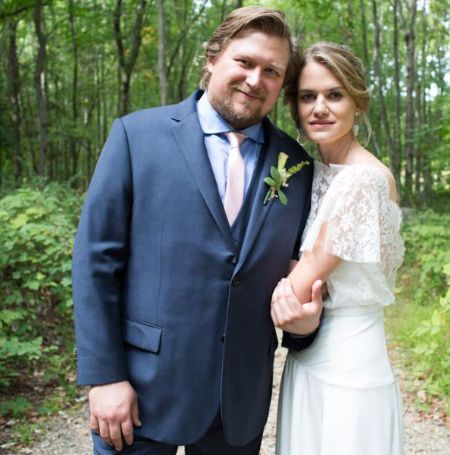 As of now, the pair has completed five years of togetherness and still shares a very strong bond with each other. To this, the pair has not planned to share any kids.

Michael Chernus has a net worth of around $1 million which he has collected from his career as a actor since 2005. As an actor, he might be getting paid more than the average salary which is $56000 per annum.

While talking about his career, he made his acting debut from his appearance in the movie named Happy Endings as Ben. After two years he was cast in the Lovely by Surprise as Humkin. After this, he has worked in several movies and series and has more than 55 acting credits in his name.

His most recent appearance is in the TV series, Ramy, Monsterland, and Evel and a movie named Materna.