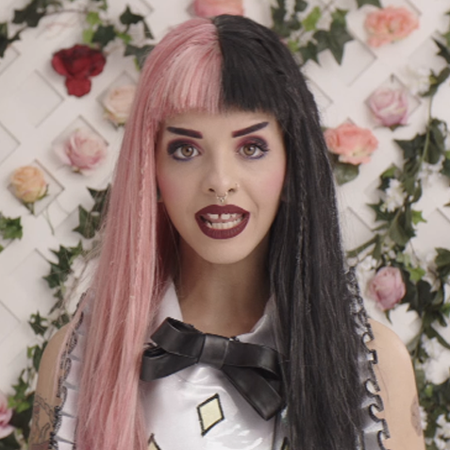 Melanie Adele Martinez better known as Melanie Martinez is an emerging music talent from the United States of America.

She is a well-known singer, songwriter, music director, and also Photographer. Melanie is famous for her appearance in the third season of the American television vocal talent show The Voice, she was on Adam Levine's team.

Melanie Martinez was born on 1995, April 28 in  Astoria Queens. Her parents are of Puerto Rican and Dominican descent.

Melanie Martinez is American by nationality had is half Puerto Rican and half Dominican ethnicity-wise. Her family migrated to Baldwin, New York on Long Island when she was four. Melanie grew up listening to her father's Beatles records and hip-hop music and wanted to be a singer from a young age.

Martinez went to plaza Elementary school where Mr. Nadien, her teacher, taught her to sing and write Poems.  Martinez told that she did not have many friends and was very emotional growing up.

Melanie Martinez came to public light when she appeared as a candidate on the TV reality show 'The Voice.' She sang Toxic by Britney Spears in the auditions and got selected. She made it to the top 6 but was eliminated during the fifth week of the live shows.

After being eliminated from the show, Melanie continued to make original music independently.  She released her debut EP  Dollhouse in 2014.

The video has more than 13.8 million views on YouTube. The same year, she announced to have signed a contract with Atlantic Records and soon will be soon going on tour.

In 2015, Melanie released her debut album Cry Baby. Pity Party, a single from the album, released on June 2, 2015, was acclaimed by critics.

Melanie has just started her career, however, she is estimated to have a net worth of $8 million.

Who is Melanie Martinez Dating?

Melanie Martinez, age 22,  is not married yet. She is reported to have been dating Michael Keenan currently. She confirmed her relationship on 14th February 2016 on her Twitter account by posting a photo together with him.

Melanie's boyfriend, Michael Keenan, is a music producer and has been together with Melanie for some years now.

Tattoo On Her Leg

She even revealed that she had an affair in the past. Melanie further told that she was totally broken after separation but has moved on now.

Melanie is also a great fan of Rihanna. She hates Vegetables and loves chocolates. Melanie has a tattoo on her leg. She says still has baby teeth at the age of 21.