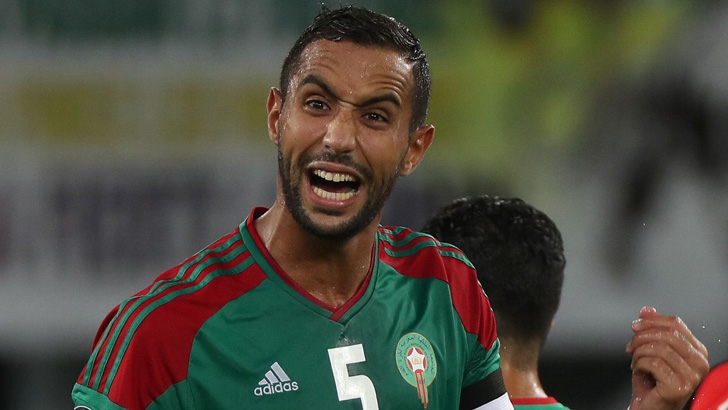 Born and raised in Courcouronnes, Medhi Benatia is a Moroccan professional footballer, plays as a center back for Italian club Juventus as well as for the Morocco national team. The athlete started his football career from French football club Marseille at the age of 16.

On November 19, 2008, Benatia made his international debut for his country in a 3-0 win against Zambia. He scored his first international goal in June 2011, in a 4-0 victory over Algeria. He won the CAF Awards for two consecutive years in 2013 and 14.

He has been included in Morocco's final 23-man squad for the 2018 World Cup in Russia. He played as a starting line-up in the game against Ir Iran and Portugal.

Medhi Benatia was born Medhi Amine EI Mouttaqi Benatia on April 17, 1987, in Courcouronnes, France to a Moroccan father and an Algerian mother. He is of Mixed ethnicity and holds French and Moroccan nationality.

Benatia started his professional football career in 2003 when he signed his first professional contract for a couple of years with French football club Marseille.

After playing on a loan season at Tours and Lorient, he then joined Ligue 2 club Clermont on a free contract on first July 2008. Following his impressive performance with two clubs, he went on to sign Serie A club Udinese Calcio, again on a free transfer.

On 13th July 2013, Benatia made an agreement with professional Italian football club Roma signing a five-year contract in a €13.5 million transfer. He registered his first goal for the club in a 2-0 win against Sampdoria.

In his first season with Roma, Benatia scored five goals in 33 games throughout the season. The following year he joined German sports club Bayern Munich making an agreement on a five-year contract for a fee of €26 million. He also helped his team defeat some of the biggest clubs in the world such as Manchester City, Chelsea, Barcelona, and Real Madrid.

The footballer scored his first goal for Bayern Munich on 13th December and his first Champions League goal came in 12th May 2015 playing against Barcelona.

On July 15, 2016, Juventus signed him on a season-long loan for €3 million. There was also the option of buying him for an extra €17 million when his loan season was over. Benatia scored his first goal for the team in a 2-1 victory against A.C. Milan in Serie A, on March 15, 2016.

Juventus lead 3–0 away to Real Madrid in the quarter-finals of the Champions League, a score that would have taken the game to extra time as Juventus lost the first leg at home 3–0.

Referee Michael Oliver awarded a 93rd-minute injury-time penalty to Real Madrid after Benatia challenged Lucas Vázquez in the box; the penalty was subsequently converted for a final 4–3 aggregate loss.

Benatia said after the game that Michael Oliver's call made him "more and more disgusted by the world of football".

On November 19, 2008, Benatia made his international debut for Moroccan national team in a 3-0 friendly win against Zambia at the Stade Mohammed V in Casablanca. He scored his first international goal for his country on June 4, 2011, in a 4-0 win over Algeria.

During the 2017 Africa Cup of Nations, Benatia also became Morocco’s captain. On November 11, 2017, he scored for his country against Ivory Coast which qualified the team for the 2018 FIFA World Cup.

He has been included in Morocco's final 23-man squad for the 2018 World Cup in Russia. He played as a starting line-up in the game against Ir Iran and Portugal.

Medhi Benatia's Net Worth And Salary

Benatia's net worth is to be more than $2 million, as per the estimation made by various online sources. The Moroccan footballer has earned a considerable amount of money from his career. As of 2015, Benatia earned an annual salary of €4.68 million.

He signed a contract with the professional Italian football club Roma for five years in a transfer fee of €13.5 million, on July 13, 2013.  The following year, Benatia transferred to Bayern Munich signing a five-year contract for a fee of €26 million.

Benatia currently plays as a center back for Italian champions Juventus. The club signed him on a season-long loan for €3 million, with an option to buy for an extra €17 million after the loan season.

Benatia stands at the height of 1.89 m (6ft 2 in). He is best known for his good technique, ball-playing ability, defensive skills, and an ability to organize his defense. Benatia has earned a reputation as one of the best centre-backs in Serie A; he is known in particular for his tackling and ability in the air.

Medhi Benatia is a married man and has two children. He has been married to his girlfriend Cecile Benatia for a long time. The couple is blessed with two children: a daughter Lina and a son, Kays.

Benatia and his wife Cecile frequently attend parties and recently attended the FC Bayan Muenchen Christmas Party at Schuhbeck’s. He also prefers to spend his quality time with his family as they are often seen in various beautiful places enjoying together.